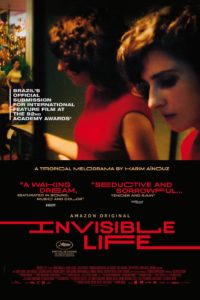 Gusmao revolves around two inseparable sisters, 18 and 20 years old, living restricted lives with their conservative parents. However, each nourishes a passionate dream: Eurídice of becoming a renowned pianist; Guida of finding true love. In a shocking turn of events, they are separated and forced to live apart. Karim Aïnouz’s first film, MADAME SATÃ, a Jean Genet-inspired story of 1930’s Rio’s drag demi-monde, premiered at Film Forum in 2003. INVISIBLE LIFE shares with it this director’s commitment to immersing himself in the emotional lives of his characters, visualized through rich, inventive, and lush imagery. Based

on Martha Batalha’s popular novel The Invisible Life of Eurídice Gusmão, the film won the Un Certain Regard prize at the 2019 Cannes Film Festival. INVISIBLE LIFE is nominated for Best International Film at the 2020 Film Independent Spirit Awards and is Brazil’s official submission to the 2020 Academy Awards® for Best International Film. Director and co-screenwriter joins us to talk about his razor-sharp, wrenching story of patriarchy, fierce determination and love in a time and place where gender mattered more than family.

About the filmmaker: Karim Aïnouz was born in Fortaleza, Brazil in 1966. He studied architecture in Brasilia and film at New York University. He was assistant director to Todd Haynes, worked on over 20 films as an editor and has been directing his own films since 1992. In 2014 his film Praia do Futuro screened in the Berlinale Competition, and he was one of the directors of Cathedrals of Culture (also 2014). Selected filmography: Madame Satã (2002), Love for Sale (2006), The Silver Cliff (2011), Futuro Beach (2014), Central Airport THF (2017), The Invisible Life of Eurídice Gusmão (2019).

“RAVISHING. A waking dream, saturated in sound, music and color to match its depth of feeling. Aïnouz has made both a testament to the resilience of women in a society stacked against them…as well as a stirring celebration of the families we create when the ones we’re born into fall away.” – Guy Lodge, Variety

“GORGEOUS. A haunting drama that quietly celebrates the resilience of women… by turns seductive and sorrowful, tender and raw.” – David Rooney, The Hollywood Reporter

“This is an absolutely gorgeous film that starts off as a sort of Rio fairytale and then turns into something a little more realistic with its feet on the ground.” – Amy Nicholson, FilmWeek