A Netflix original documentary,  Struggle: The Life and Lost Art of Szukalski takes us inside the mind of one of the last century’s great characters, offering a startling look at 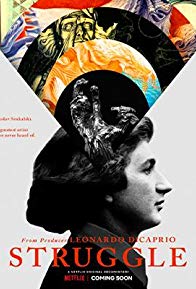 how history can stand in the way of true artistic genius in one generation while stepping aside to reveal it dramatically in the next. In 1968, pop culture collector Glenn Bray, who had an interest in surrealist art, happened upon an unusual book featuring the art of Stanislav Szukalski.  Like most people, Bray had never heard of Szukalski, but he delighted in showing the book of drawings and photos of sculptures to his circle of friends in the underground art comic world, including Robert and Suzanne Williams and George DiCaprio, who found the forgotten Polish master’s vision far ahead of its time. It was a few years later when Bray noticed an unusual poster

depicting Copernicus on the wall of a small bookstore in Tarzana – something he immediately recognized as the work of Szukalski.  The bookseller informed him that the artist himself had given the poster as a gift – in fact, he lived nearby.  Bray couldn’t believe it – this long-forgotten genius was still alive, and in the same area code. Featuring archival footage and

dozens of interviews with Szukalski himself,  Struggle: The Life and Lost Art of Szukalski offers a startling look at how history can stand in the way of artistic genius in one generation while stepping aside to reveal it dramatically in the next. Director Irek Dobrowolski and Producer Stephen Cooper join us to talk about an incredible artist and incredibly complex, nearly forgotten “genius” who remained true to his inner demons.

netflix.com/Struggle: The Life and Lost Art of Szukalski