In 1979, soon after Ayatollah Khomeini took power in Iran and the ousted 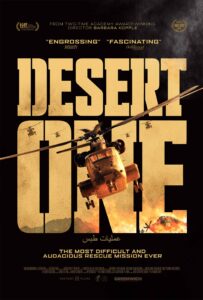 Shah found shelter in the United States—to the great frustration of Iran’s new leaders—a group of revolutionaries attacked the U.S. Embassy in Tehran and took 52 Americans hostage. They were held captive there for 444 days. President Jimmy Carter announced that he wanted to resolve the situation through diplomatic channels, but later on he planned a secret military rescue mission. DESERT ONE is a fast paced as a thriller from acclaimed director Barbara Kopple. Kopple draws upon a wealth of unearthed archival sources, as well as intimate interviews with President Jimmy Carter, Vice President Walter Mondale, Ted Koppel, former hostages, journalists, and Iranian student revolutionaries who orchestrated the take-over of the American Embassy in Tehran—to meticulously reconstruct this defining period in

history when U.S.-Iranian relations were on the brink of disaster. Illustrated with animations and lots of archive footage, the story focuses on the woefully unsuccessful rescue mission and the political wrangling in the background, culminating in Carter’s landslide loss to Ronald Reagan in 1980. Director and Producer Barbara Kopple, Ambassador John Limbert and Staff Sergeant Taco Sanchez joins us to talk about the roller coaster story that includes a game-changing sand storm, equipment failure, a deadly crash and a US President willing to take responsibility for a mission gone wrong. The fallout from the failed mission still hangs heavy over the fractured US-Iranian relationship.

For news, updates and screenings go to: film/desert-one

About the filmmaker: Barbara Kopple is a two-time Academy Award winning filmmaker. A director and producer of narrative films and documentaries, her two most recent projects are the documentaries Miss Sharon Jones! which premiered at Toronto International Film Festival in September 2015, was the opening night film of DOC NYC and tracks the talented and gregarious soul singer of the Grammy-nominated R&B band Sharon Jones & the Dap-Kings during the most challenging year of her life and Shelter which tells a story of vets saving vets, delving into the psychological trauma created by military service, the effects that remain long after active duty, and the difficult road back to a normal life for these women and men. Other recent projects include Hot Type: 150 Years of The Nation which examines America’s oldest continuously published weekly magazine through the eyes of the passionate journalists who have sustained its critical voice and Running from Crazy, which premiered at Sundance in 2013 and received a 2014 Primetime Emmy nomination for Outstanding Documentary or Nonfiction Special. Fight To Live, which through the eyes of terminal patients and their advocates tells the story of the struggles many with rare and orphan diseases face in choosing their preferred therapies through the roadblocks imposed by the current FDA approvals process. A Force of Nature, which celebrates the life and work of journalist and philanthropist Ellen Ratner, following her from her home base in Washington, DC, to hurricane-ravaged Mississippi to war-torn South Sudan; Gun Fight, which explores the place of guns in US culture, profiling victims of gun violence and proponents on both sides of the gun debate; The House of Steinbrenner, part of ESPN’s Emmy nominated “30 for 30” series, which received a 2010 Peabody Award as well as the International Documentary Association Award for Best Continuing Series; and the Emmy-nominated, Woodstock: Now and Then, a look back at the legacy of the historic music festival, 40 years later. Well known for her work on US labor issues, Barbara directed Steamfitters Local Union 638 in 2007 for HBO’s acclaimed Addiction Series. The New York Times likened this short documentary to “crisp tonic with lime.” This program was awarded the Television Academy of Arts and Sciences Governor’s Award.  For more on Barbara Kopple’s films go to: cabincreekfilms.com

“Kopple covers every angle of the story and the history in this gripping documentary that combines incredible archival footage and recordings with interviews of some surviving hostages and members of Delta Force, the unit that attempted the rescue.” – Catherine Springer, AwardsWatch

“You emerge from “Desert One” knowing certain aspects of the Iran-hostage crisis better than you did before. That makes it a worthy film, and an absorbing one.” – Owen Gleiberman, Variety

“As usual, master documentarian Barbara Kopple is up to the task.” – Cameron Meier, MeierMovies.com