A lifetime of making documentaries has convinced award-winning filmmaker 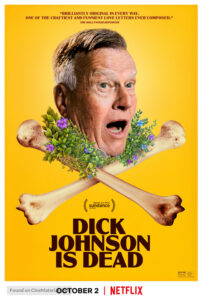 Kirsten Johnson of the power of the real. But now she’s ready to use every escapist movie-making trick in the book – staging inventive and fantastical ways for her 86-year-old psychiatrist father to die while hoping that cinema might help her bend time, laugh at pain and keep her father alive forever. The darkly funny and wildly imaginative DICK JOHNSON IS DEAD is a love letter from a daughter to a father, creatively blending fact and fiction to create a celebratory exploration

of how movies give us the tools to grapple with life’s profundity. DICK JOHNSON IS DEAD was filmed, produced and directed by Kirsten Johnson (Cameraperson), produced by Katy Chevigny and Marilyn Ness, co-produced by Maureen A. Ryan and executive produced by Megan Ellison. Director Kirsten Johnson joins us for conversation on her approach to working along side her dad, making the personal universal and how sharing her own acquired wisdom has impacted her life.

For news, screenings and updates go to: dickjohnsonisdead.com

Watch it: netflix.com/Dick Johnson is Dead

About the filmmaker – Kirsten Johnson is a cinematographer and director interested in addressing the changing dimensions and urgent ethical challenges of documentary camerawork. Her most recent film, CAMERAPERSON, premiered at Sundance 2016, was shortlisted for an Academy Award, won the National Board of Review “Freedom of Expression” prize, and was awarded three 2017 Cinema Eye Honors, including ‘Outstanding Nonfiction Feature’. CAMERAPERSON was named one of the ‘Top Ten Films of 2016’ by The New York Times and The Washington Post, was the Grand Jury Prize Winner of 9 international festivals, won the ARRI Cinematography Award, and is distributed by The Criterion Collection. Her short, THE ABOVE, premiered at the 2015 New York Film Festival and was nominated for the International Documentary Association ‘Best Short Award’ for 2016. Kirsten’s camerawork has appeared in the Academy Award-winning CITIZEN FOUR, Cannes Premiere RISK, Academy Award-nominated THE INVISIBLE WAR, Tribeca Documentary Winner, PRAY THE DEVIL BACK TO HELL, Cannes winner FAHRENHEIT 9/11, and Emmy Award-winning LADIES FIRST. She shared the Sundance 2010 Cinematography Award with Laura Poitras for their work on THE OATH. She and Katy Chevigny co-directed the Berlinale premiering DEADLINE, which won the Thurgood Marshall Award. She teaches “Visual Thinking” in the NYU Graduate Journalism Department. In 2017, she was awarded the Chicken and Egg Breakthrough Filmmaker Award and she is currently a Sundance Art of Nonfiction Fellow. She is a 2017 Guggenheim Fellow and was recently invited to be one of the 4% of ASC members who are women.

“A deeply moving vision of life in the face of bodily death and the threatened loss of selfhood, as well as a loving unpacking of the lifetimes of memories from which families are made.” – Richard Brody, New Yorker

“Instead of pushing her father’s death to the back of her mind, Johnson embraces it fully and even has fun with it. She takes her heartache and turns it into joy.” – Brianna Zigler, Little White Lies

“Unabashedly toying with the conventions of obituary, the documentation of the infirm, and the memorialization of a parent, the end result is a triumph.” – Jason Gorber, POV Magazine

“A touching and funny meditation on embracing life and fearing death at the same time.” – Eric Kohn, indieWire