Filmed across an entire year, DO NOT SPLIT takes us within the 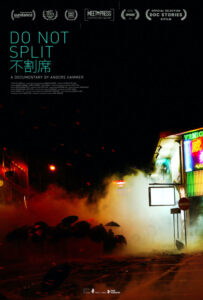 heart of the 2019 Hong Kong protests, capturing the determination and sacrifices of the city’s youth as their movement becomes symbolic for a generation’s rebellion against the political systems of two governments. Armed with umbrellas, gas masks, social media, and sheer determination, the protestors risk their lives, safety, and futures against the police’s tear gas, armed vehicles, and violence. Anders Hammer’s powerful film paints a nuanced and sobering picture of the challenges faced by the protestors,  joining student leaders and protestors on the ground to give an

expansive and first-hand portrait of the unrest that prompted a government’s backlash, the passage of the new Beijing-backed national security law, and captured the attention of the world. Director Anders Hammer joins us to talk about the history of Hong Kong’s relationship to the British empire and the handover to the People’s Republic of China, the 20-year deterioration of civil and political rights as well as the determined bravery of the student led protestors determined to resist the tightening grip of an increasingly oppressive regime.

For news, screenings and updates go to andershammer.com

About the filmmaker – Anders Hammer has filmed and directed the documentary Do Not Split which takes us within the heart of the Hong Kong protests that started in the summer of 2019. The movie premiered at the Sundance Film Festival and received the Special Jury Prize at AFI DOCS and Special Jury Recognition for Courage under Fire at DOC NYC. Hammer directed the documentary series Our Allies for Field of Vision. He also directed and produced Escape from Syria: Rania’s Odyssey, which was published by The Guardian and won a Webby Award and a One World Media Award for Best Refugee Reporting in 2018. The documentary went viral and gained more than 10 million views and 100,000 shares in social media. Hammer is one of the directors of the documentary  Exit Afghanistan published by Netflix. He has directed seven documentaries for the Norwegian investigative journalism program NRK Brennpunkt and many short documentaries. Hammer lived and worked in Afghanistan for six years and has written four documentary books about the country, one of them together with the Danish author Carsten Jensen. In Norway, where Hammer was born in 1977, he has received the Fritt Ord Award (which is given in support of freedom of expression), the International Reporter’s Journalism Award and the Big Journalist Award.

“A frenetic, urgent look at the protests that have rocked the city since June 2019” – Susannah Gruder, Hyperallergic