DON’T TRY TO UNDERSTAND: A Year in the Life of Earl “DMX” Simmons is a no- 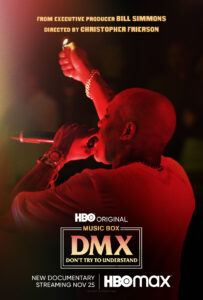 holds-barred portrait of hip-hop’s most tortured superstar. A deeply personal exploration of Faith, Addiction, Loyalty and Family, the film chronicles a year in the life of a man with a burning desire to reconcile decisions of the past. Fresh out yet another bid in Federal prison, 2019 finds Earl “DMX” Simmons at a crossroads. With an insurmountable debt owed to the IRS, an ever-growing family to feed, and immense pressure to return to the heights of yesteryear; the

stakes couldn’t be higher. DON’T TRY TO UNDERSTAND in cinéma vérité style and with unfettered access, the film bears witness to a man searching for reinvention and redemption, striving to stay true to himself while reestablishing his roles as a father, an artist and an icon.We follow Earl Simmons as he navigates this

difficult circumstance: from re-acclimating to society in the midst of a grueling nationwide tour, to reuniting with his estranged first-born son. The film is an intimate glimpse into a man whose future and legacy, livelihood, and liberty, are all on the line. Director Christopher Frierson (The King, Denial, Dirty Pictures) joins us to talk about Earl Simmons “DMX” from the point of view of a man facing the unavoidable questions swirling around his own mortality, family, and faith in God.

About the filmmaker – Christopher Frierson director, producer, cinematographer, is also known for his work as a producer and host for the Mass Appeal podcast and his work on numerous films between 2001 and 2020.He is most recently known for capturing and documenting the moment he is pepper sprayed by police, and going back to have a conversation with them, amidst the protests against police brutality and racism. Frierson has worked on numerous films between 2001 and 2020.He is also known for being a host on an eight episode podcast titled Freaknik: A Discourse on a Paradise Lost that discusses the Atlanta street party scene of the 80’s and 90’s, known as Freaknik Street Parties. Most recently he directed documentary film he directed, Don’t Try To Undestand: A Year in the Life of Earl ‘DMX’ Simmons currently available on HBO and HBO MAX.