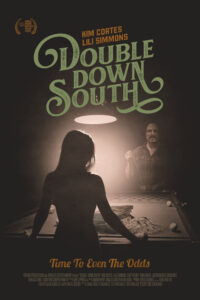 of illegal, high-stakes keno pool gambling at the turn of the 21st century. Nick (Kim Coates, “Bad Blood”) owns a run-down plantation house in the rural South and is charmed by a smart and tough Keno ace, Diana (Lili Simmons, “Power Book IV: Force”). Diana wants to win big and Nick is determined to stake her. Little Nick (Igby Rigney,“The Midnight Club”) strikes up a friendship with Diana and coaches her to win against the odds. Diana must prove herself in a man’s world to earn a match against Beaumont DuBinion (Justin McManus, “Power Book II: Ghosts”), the undisputed world’s greatest keno pool player,

who, it turns out, has a contentious and violent history with Nick. Written and directed by Academy Award© winning writer Tom Schulman (Dead Poets Society), the story is reflective of

the misogyny and casual and blatant racism that still exists in our country. Schulman grew up in the South in the 50’s and 60’s and frequented pool halls where  high-stakes keno was the game of choice for the regulars, a game which is so insidious from a gambling perspective that it was banned in most states. Director Tom Schulman stops by to talk about his superb cast he has assembled, finding the perfect location for this project  and the joy of working in the realm of noir / Southern Gothic genre filmmaking.

For more go to: doubledownsouthfilm.com

About the filmmaker – Tom Schulman won an Academy Award for his screenplay Dead Poets Society, starring Robin Williams, and the film was nominated for Best Picture and Best Director (Peter Weir). His feature directorial debut was the dark comedy 8 Heads in a Duffel Bag, starring Joe Pesci as a gangster attempting to transport a bag of severed heads across the United States.Schulman also wrote or co-wrote Honey, I Shrunk the Kids, Second Sight, What About Bob?, Welcome to Mooseport, Holy Man, which stars Eddie Murphy, and the Sean Connery drama Medicine Man. He was an executive producer on Indecent Proposal and Me, Myself & Irene.He co-wrote and co-produced the HBO pilot The Anatomy of Hope with Rafael Yglesias and J.J. Abrams, and recently collaborated with Callie Khouri, Trae Crowder, and T Bone Burnett on the writing of One Lane Road.Tom served on the board of directors and then as vice president of the Writers Guild of America, West. Tom was the president of the Writers Guild Foundation and serves on its board. He serves on the advisory board of the Science and  Entertainment Exchange.  Double Down South is Tom’s second feature film as director.

“…a rough, tough confidence-thriller than delivers on tension, and tells an engrossing tale about a sport you probably didn’t know existed…” – Eddie Harrison film-authority.com

“You know there is something more than what you are being shown as every character seems to have secrets they are hiding. The intrigue grows as the film advances.” – Carey-Ann Pawsey, Orca Sound