DRIVING WHILE BLACK: RACE, SPACE AND MOBILITY IN AMERICA is a ground- 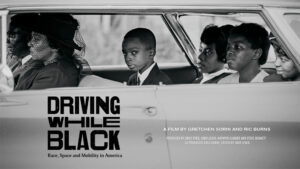 breaking, two-hour documentary film by acclaimed historian Dr. Gretchen Sorin and Emmy–winning director Ric Burns. Chronicling the riveting history and personal experiences – at once liberating and challenging, harrowing and inspiring, deeply revealing and profoundly transforming  –  of African Americans on the road from the advent of the automobile through the seismic changes of the 1960s and

hundreds of years – told in large part through the stories of the men, women and children who lived through it. The documentary draws upon the wealth of recent scholarship – and based on and inspired in large part by Gretchen Sorin’s recently published study of the way the automobile and highways transformed African American life across the 20th century – the

film examines the history of African Americans on the road from the depths of the Depression to the height of the Civil Rights movement and beyond, exploring along the way the deeply embedded dynamics of race, space and mobility in America during one of the most turbulent and transformative periods in American history. Co-directors Gretchen Sorin and Ric Burns join us to talk about the crippling impact of systemic racism and the continuing stain of America’s original sin.

For  more on the story and history behind the the film go to: dwbfilm.com

About the filmmaker – Gretchen Sullivan Sorin, Project Director & Senior Historical Advisor Dr. Gretchen Sullivan Sorin is Distinguished Professor and Director of the Cooperstown Graduate Program. Her dissertation and upcoming book form the basis of the scholarship for this project. Her research explores the role that the automobile played in the lives of African Americans during the Jim Crow era, the way that African Americans expressed middle class American values through car ownership, and how cars helped change deeply entrenched racial etiquette. Sorin received her Ph.D. in history from the University at Albany in 2009. For more on the work of Dr. Gretchen Sorin go to gpmuseumstudies.org

About the filmmaker – Ric Burns is an internationally recognized documentary filmmaker and writer, best known for his eight-part, seventeen and a half hour series, New York: A Documentary Film, which premiered nationally on PBS to wide public and critical acclaim when broadcast in November 1999, September 2001, and September 2003. Burns has been writing, directing and producing historical documentaries for over 25 years, since his collaboration on the PBS series The Civil War, (1990), which he produced with his brother Ken and co-wrote with Geoffrey C. Ward.  Since founding Steeplechase Films in 1989, he has directed some of the most distinguished programs for PBS including Coney Island (1991), The Donner Party (1992), The Way West (1995), Ansel Adams (2002), Eugene O’Neill, Andy Warhol (2006), We Shall Remain: Tecumseh’s Vision (2009), Into the Deep: America, Whaling & the World (2010), Death and the Civil War (2012), American Ballet Theatre (2015), Debt of Honor (2015), The Pilgrims (2015), VA: The Human Cost of War (2017), and The Chinese Exclusion Act (2018). His work has won numerous film and television awards including six Emmy Awards, two George Foster Peabody Awards,  two Alfred I. DuPont-Columbia University Awards,  three Writer’s Guild of America Awards for Outstanding Individual Achievement in a Craft: Writing;  the Eric Barnouw Award of the Organization of American Historians, and the D.W. Griffith Award of the National Board of Review. Find out more about Ric Burns and Steeple Chaase Films at: ricburns.com  And dwbfilm.com