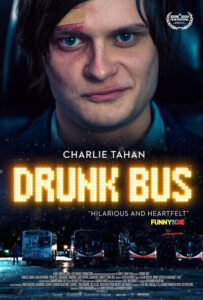 plan was derailed when his girlfriend leaves him for a job in New York City. Stuck in Ohio without a new plan of his own, Michael finds himself caught in the endless loop of driving the “drunk bus,”

the debaucherous late-night campus shuttle that ferries drunk college students from parties to the dorms and back, waiting for his ex, Amy, to come back to him. When the bus service hires a security guard to watch over the night shift, Michael comes face to tattooed face with Pineapple

(Pineapple Tangaroa), a larger-than-life Samoan American who challenges him with a kick in the ass to break from the loop

and start living or risk driving in circles forever. Co-directors John Carlucci & Brandon LaGanke stop by for a spirited conversation on growing up in Ohio, John Hughes, the true life inspiration for Drunk Bus, meeting Pineapple Tangoroa and their love of filmmaking.

For news, screenings and updates go to drunkbusmovie.com

About the filmmakers – JOHN CARLUCCI & BRANDON LAGANKE (Directors) DRUNK BUS is the feature debut for GHOST + COW; a directing duo comprised of John Carlucci and Brandon LaGanke. Ghost + Cow has had global viral success with several projects. DRONE BONING (11M on Vimeo) – a comedic and voyeuristic look at sex and drone surveillance – was dubbed by VICE Motherboard as “the world’s first aerial pornography.” The film made world news and garnered the attention of late-night hosts such as Stephen Colbert, Conan and Seth Meyers. It was also featured in several print publications, was shown on TMZ and posted on Banksy’s YouTube page. Their music videos for Big Data’s DANGEROUS (14M on YouTube) and Joywave’s IT’S A TRIP (2.2M on YouTube) continue to have a massive fan following. Some other short film titles include PLAYHOUSE (World Premiere at SXSW 2013 and a Vimeo Staff Pick with 146K views), BUNNY BOY (2011 Slamdance, SXSW) and INFINITY TREE (Cannes Series) which was created with FOX Digital.

Director’s Statement – We are very fortunate to have found that partner in our producer, Eric Hollenbeck (NATIVE SON, TOMORROW MAN, KINGS OF SUMMER), who immediately supported our creative vision, believed Pineapple could hold his own on screen and knew we were capable of the task ahead. He helped us assemble an amazing age-appropriate cast as well as an incredible crew who guided us through some major challenges like shooting in the dead of winter in Rochester, New York. DRUNK BUS, in contrast to the name, is a unique coming of age story fraught with uncomfortable authenticity and a whole lot of heart. It wasn’t just a challenge making it, but an experience and a triumph- we really hope you enjoy watching it as much as we did making it. – Co-directors John Carlucci and Brandon LaGanke

“There’s a wonderful sense at the end of Drunk Bus that there are a dozen more stories that could begin after the credits roll.” – Ian Simmons, Kicking the Seat