The eye-opening documentary, EXPLANT, examines the #1 cosmetic surgery in 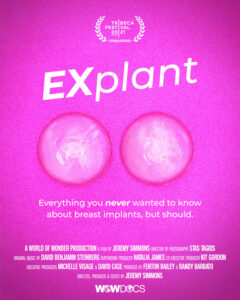 breast implants most of her adult life,  believe they are making her sick – and she’s not  alone. Over the years, hundreds of thousands of women have come forward with similar beliefs, clashing the the medical establishments claim’s that implants are completely safe. The EXPLANT follows Michelle Visage on her personal journey to have her implants removed.  It also takes a deep dive into the

stranger-than-fiction history of the breast implant. From interviews with the first-ever recipient of the modern-day implant to a confession from a whistleblower, the film shows how complications and auto-immue issues have shadowed implants for decades – and why the medical

establishment is reluctant to warn patients of these risks. EXPLANT is produced by World of Wonder co-founders Randy Barbato and Fenton Bailey and directed by Emmy-winning filmmaker Jeremy Simmons, with executive producers Michelle Visage and David Case. Director Jeremy Simmons joins us for a conversation on the history of implants, the benefits as well as the potential medical complications, the implant manufacturers resistance to honest inquiry and obfuscation of medical research by them and the determined courage of the film’s subject, Michelle Visage, to seek out her truth regarding the impact that implants have had on her life.

For news and updates go to: worldofwonder.com/explant

EXPLANT is now available at: Paramount+.com

About the filmmaker – Jeremy Simmons has created, directed, and produced over 100 hours of documentary and reality programming, including the Emmy® Award-winning documentary, The Last Beekeeper, the Sundance Channel, GLAAD award winning docu-series,  Transgeneration, and the upcoming limited series  Homemade Astronauts, a Discovery+ original about everyday people, shooting for the stars.Jeremy Simmons, the Emmy and GLAAD award winning director of World of Wonder’s subversive documentary project, EXPLANT.  The film premiered at Tribeca at Home and is set to launch on December 15.