Directed by Francine Parker the long-censored documentary with Academy 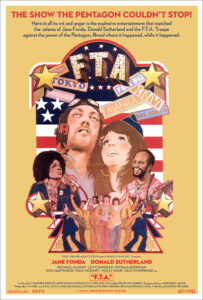 Award-winning actor & activist Jane Fonda and Donald Sutherland in their 1970s satirical revue, “Free The Army”.  In 1971, at the height of the Vietnam War,  Academy Award-winning actor and activist Jane Fonda, Donald Sutherland and fellow performers mounted the F.T.A musical comedy tour across Southeast Asia as a response to Bob Hope‘s USO tour. They redubbed the original Army recruitment slogan “Fun, Travel, Adventure” to “Free The Army or F*** The Army”. After the Army tried to

limit the troops’ access to performances, it became known as “The Show the Pentagon Couldn’t Stop!” Fonda and Sutherland’s co-stars included writer/actor Michael Alaimo, singers and activists Holly Near, Rita Martinson, Len Chandler, and comedian Paul Mooney. Despite being 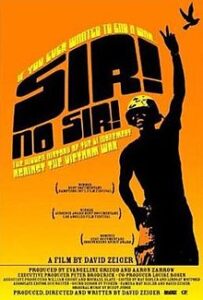 highly controversial, the show was a huge success amongst enlisted men and women, many of of whom appear in the film expressing their disillusionment with war, imperialism and racism. F.T.A.  has now been fully restored in 4K by IndieCollect and is preceded by a new video introduction by Jane Fonda, which provides historical context and explains the impetus that sparked the creation of the F.T.A. troupe. Director David Zeiger joins us to talk about the history of resistance to the war in Vietnam, the under-reported movement within the military to the war and the support and participation by artists, producers, and high profile actors like Jane Fonda and Donald Sutherland.

Watch at: kinomarquee.com/F.T.A. – Free The Army

For more about the films of David Zeiger go to: displacedfilms.com

The long-censored documentary with Academy Award-winning actor & activist Jane Fonda and Donald Sutherland in their 1970s satirical revue,  F.T.A. – Free The Army. This film is now playing in virtual cinemas. Click here to find a Kino Marquee virtual cinema supporting a theater near you.

Sir! No Sir! unfolds the stunning but suppressed story of the military men and women who helped force the U.S. Government to end the Vietnam War. The film was produced, directed, and written by David Zeiger. The film had a theatrical run in 80 cities throughout the U.S. and Canada in 2006, and was broadcast worldwide on: Sundance Channel, Discovery Channel, BBC, ARTE France, and several others. The DVD, which is distributed by Cinedigm, also includes 100 minutes of additional stories from the GI Movement.

About the filmmaker – Guggenheim Fellow David Zeiger has been making documentary films and series for 25 years, starting with The Band, a film about his son’s junior year in high school, broadcast on the PBS series P.O.V. in 1997. That was followed by the landmark thirteen-part PBS (U.S.) and Planete Cable (International) series Senior Year in 2002. Senior Year was funded by CPB, PBS, NAATA, LPB, and the MacArthur and Kellogg foundations, and was a national presentation by PBS. His short documentary, Funny Old Guys, was broadcast in 2002 by HBO. His 2006 film, Sir! No Sir!, ran theatrically in 65 cities throughout the U.S. and Canada and was broadcast in 200 countries worldwide, including on BBC Storyville, ARTE France, ABC Australia, and the Sundance Channel in the U.S. It won Best Documentary at the Los Angeles Film Festival (Audience Award) and Hamptons Film Festival, and Seeds of War Award at the Full Frame Documentary Festival, along with nominations for an International Documentary, Independent. For more go to: displacedfilms.com

“Fonda brings down the house.” – Variety

“A genuine, powerful and even stirring expression of the antipathy engendered by war… and scarred the psyches of those who lived through it.”- J. Hoberman, The New York Times

“Holds up as a terrifically funny movie. Nixon might be long dead, but if you want to sock it to him regardless, be sure to check this out.” – Dan Schindel, Hyperallergic

“Sounding out a once-elusive call of defiance for all to hear… [Fonda] and her comrades loved the country that they devoted their energies and risked their reputations to better it, their criticisms the ultimate act of patriotism.” – Charles Bramesco, The Guardian

“A vibrant artifact. The message of F.T.A. is still infuriatingly relevant. This new restoration connects the present to the past.” – Nathan Smith, Nashville Scene

“A stunning portrait of an antiwar musical comedy revue that was a corrective to Bob Hope’s  gung-ho UFO shows.” – Louis Proyect, The Unrepentant Marxist

“Funny, biting and tuneful, it takes you right back there if you lived through it, and might be an eye-opener for activist ‘Ok, Boomer’ millennials.” – Roger Moore, Movie Nation

“An important record showing the strength of the American people’s opposition to the Vietnam War.” – Jennifer Marin, About.com