FAMILY SQUARES drops us into the dysfunctional world of the Worths. When 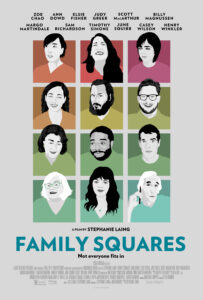 Grandma Mabel dies suddenly, they must set aside their differences and come together. Mayhem quickly ensues as long buried family secrets bubble to the surface with a shocking revelation. But, as they begin to find their way back to each other, they soon realize that while you can’t choose your family, you can choose to be friends with them. FAMILY SQUARES features an all-star cast the includes; Ann Dowd (Hereditary), Elsie Fisher (Eighth  Grade), Judy Greer (Archer), Billy Magnussen (No Time To Die), Margo Martindale (August: Osage County), Sam Richardson (Veep), Timothy Simons (Veep), June Squibb (Nebraska),

Maclaren Laing (Eastbound & Down), and Henry Winkler (Happy Days). Director and co-writer Stephanie Laing (Veep) joins us to talk about her boisterous, poignant, funny, heartfelt, recognizable and loving look at a family mournfully undergoing a stress test during a pandemic in a Zoom-centric new world order.

For updates and screenings go to: screenmediafilms.net/Family-Squares

About the filmmaker – Emmy Award winning television producer and director Stephanie Laing launched her production career partnering with Tracy Ullman on her popular sketch comedy show Tracey Takes On… Next came the HBO series Little Britain, followed by Documental, Eastbound and Down and  Veep, where she expanded her repertoire, directing two episodes in Season 4. Laing recently produced and directed her first film short, Trouble & the Shadowy Deathblow, starring Emmy Award winning actor Tony Hale, which won Best of the Festival at the Toronto International Short Film Fest. She has also been brought on as Executive Producer for the new Danny McBride HBO series Vice Principals.

“The emotional hardship of being far from home during a crisis has never been more relatable, but viewers may need more distance from quarantine life to really appreciate this pandemic dramedy. – Tara McNamara. Common Sense Media

“Secrets are revealed, hilarity ensues, and beneath all the bickering and madcap moments of comedy, a touching film emerges exposing the unconditional love at the heart of every family. Superb cast.” – Joe Friar, Fort Worth Report

“A strong argument can be made that there have already been too many pandemic movies. This seems like it is going to be another, but it is not long before the excellent writing and strong characters show there is something more. Funny and heartwarming.” – Nathaniel Muir, AIPT