As America currently deals with a rash of anti-Asian sentiment, FAR EAST DEEP SOUTH is a deeply moving story that offers a poignant perspective on race 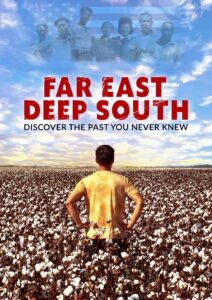 relations, immigration and the deep roots of Chinese Americans in our national identity. The award-winning documentary follows Charles Chiu and his family (including his son, producer Baldwin Chiu, and daughter-in-law, director Larissa Lam) as they travel from California to Mississippi to find answers about Charles’ father, K.C. Lou. A retired Air Force reservist, Charles was left behind in China as a baby and is reluctant to discuss his family’s complicated past with his sons, Baldwin and Edwin. The family’s emotional journey to a place they’ve never seen leads to stunning revelations and a crash course on the surprising history of Chinese immigrants in the segregated South. Through encounters with local residents who remember K.C., as well as interviews

with historians, Congresswoman Judy Chu and others, the family’s trip becomes a once-in-a-lifetime opportunity for discovery and healing. FAR EAST DEEP SOUTH is based off the award-winning short film, Finding Cleveland.

The film presents a very personal and unique perspective on immigration, race and American identity. Director Larissa Lam and producer Baldwin Chiu join us for a conversation on how a family trip and personal film project evolved into a revelatory story and sweeping historical overview of the immigrant Chinese experience and deeply moving family saga.

For news and updates go to: Far East Deep South.com.

FAR EAST DEEP SOUTH premieres on the WORLD Channel documentary series America ReFramed on Tuesday, May 4, 2021, 8:00 p.m. EST (check local listings). It will also be available to stream on WORLDchannel.org, PBS.org and the PBS Video app beginning at time of broadcast on May 4 and throughout May in honor of Asian American Pacific Islander Heritage Month.

About the filmmaker – Larissa Lam, Director, Writer and Producer, is making her feature film directorial debut with the documentary Far East Deep South. The film has won garnered awards at numerous film festivals including CAAMFest, Cinequest, Oxford Film Festival and Seattle Asian American Film Festival. She previously directed the acclaimed short documentary Finding Cleveland, which is the basis for Far East Deep South. She has produced TV shows such as “Top 3” for JCTV, music videos and other short form videos such as “A Day in the Life of an Engineer” for Intel’s Stay With It campaign. She was part of a distinguished group of filmmakers invited to be part of the Smithsonian’s History Film Forum Emerging Filmmakers Lab. In addition to directing Far East Deep South, Lam is an award-winning singer and songwriter who has released four critically acclaimed solo albums, including her most recent, Love and Discovery. Her song, “I Feel Alive” won the Hollywood Music in Media Award for Best Dance Song and was the theme song for a national suicide prevention campaign. Lam began her career as the Chief Financial Officer of NSOUL Records and has written & produced music for TV (The Oprah Winfrey Show, Dr. Oz, E!, TLC), film (Zulu, Gone) and video games (Konami, Square Enix). Lam is passionate about empowering and inspiring others through film, music and speaking engagements. A dynamic speaker, she has spoken on diversity and inclusion, the Asian American experience among other topics at TEDx, Leadercast and numerous universities such as Yale, UCLA and MIT.  For nine years, Lam hosted a talk show on JCTV interviewing prominent authors, humanitarians and celebrities. Currently, she hosts the podcast, “Love, Discovery and Dim Sum“, which she co-hosts with her husband, Baldwin Chiu. She is a native of Diamond Bar, CA and graduated UCLA with a degree in Business Economics.

About the filmmaker – Producer Baldwin Chiu and his family are the subjects of Far East Deep South and he teamed up with his wife, Larissa Lam, to produce the film. The film will make its national broadcast debut on “America Reframed” on World Channel (PBS) in May 2021. His family’s story has previously been featured on NBC News and NPR among other media outlets. He is a graduate of the ACT One film producing program, and he previously produced the award-winning documentary short, Finding Cleveland. He was born in San Francisco and raised in Sacramento, where he later graduated from California State University, Sacramento with a degree in mechanical engineering.

“Informative and compelling. A poignant American story that lingers with you even after it’s finished.“ – Lauren Tuck, Creative Executive, Harpo Films.

“This documentary, with the feel of family drama, will impact you & even move you to tears.” – Pratibha Kelapure, The Literary Nest

“A gorgeous and moving story that unveils an important part of American history.” – Edward Douglas, The Weekend Warrior