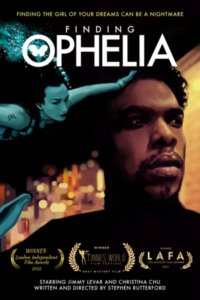 Edgar inhabits a strange dream-like reality. His obsession with a mysterious woman leads down a bizarre, dark path of signs and wonders. Sometimes finding the girl of your dreams can be a nightmare. New York Advertising Executive William Edgar (Jimmy Levar) is mesmerized by a series of hypnotic dreams that blur the lines between fantasy and reality. His life is thrown into disarray when forced to choose between his career, his

relationships and his romantic obsession with a mysterious  woman, (Christina Chu) Doing whatever it takes to find her, leads down a bizarre, dark path of signs and wonders, William soon discovers that finding the girl of your dreams can be a nightmare. Director / Writer / Producer / Cinematographer / Editor / Colorist Stephen Rutterford (Hana So & So, Home by Six) joins us to talk about his mind-blowing, highly cinematic fevered dream of obsession, mortality, love, music, missed opportunity, coffee and a very important sales meeting.

For news, screenings and updates go to: findingophelia.com

Director’s Statement. – Films are like dreams; They allow us to escape our everyday reality for a fleeting moment. Carl Jung once said “Who looks outside, Dreams; Who looks inside, Awakes.” In this film we see William Edgar’s life unravelling before us. His dream life becoming more real and his real life becoming more dream-like. I have always been fascinated with dreams. Why we have them and what they mean. They are like a parallel universe that exists within us. Finding Ophelia has several “meditative moments.” By using unusual sounds, movement, abstract shapes, symbolic imagery and bold color, I intended these scenes to act like moving abstract paintings that evoke certain emotions, enabling the viewer to drift off into their subconscious. This allows us to get inside the mind of the lead character and feel what he’s feeling. The film is shot with the realism of a documentary-style, but executed in a hyper-real, dream-like fashion. Much of the imagery for the film came to me when listening to music. The kind of ethereal soundscapes with drones that take your mind to another place. So the soundtrack played a very important part in how the story was told. It had to take you out of your mind and out of your comfort zone. Thankfully I was able to collaborate with some very innovative, experimental musicians like Ben Runyan, The Prolificators DVR/ EFKTS and Brainorchestra. Once I had these abstract ideas, I then began to thread them together into a single narrative. We all desire idols in our life; It can be love, money, power and more recently our continual urge for entertainment. What idol would you walk a treacherous path to reach?For Wiliam Edgar it was “Love;” The desire to find the girl of his dreams. Unfortunately for him it turned out to be a nightmare. – Stephen Rutterford.

About the filmmaker – Stephen Rutterford is a British born Director and Visual Artist based in Brooklyn, NY. Cutting his teeth in Advertising as a Creative Director, Rutterford has collaborated with artists including Pharrell Williams, Talib Kweli, Astronautica, Shepard Fairey, Faile, D*Face and Michel Gon- dry, and has directed music videos for Black Asteroid, Hana, Fashawn, The IZM, Just Process (feat. Joannie Jimenez ) and Chris Stylez. His debut short film ”Back Page Ripper” garnered over 23 official selections at film festivals Worldwide. Including Winner of The LA indie Film festival for best short film. He is the Director and Producer of multi award winning independent feature film “Finding Ophelia” starring Jimmy Levar and Christina Chu. For more go to: shadowrunner.industries