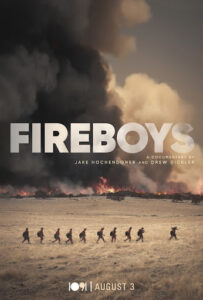 offered a way out: by fighting wildfires. Immersive and personal, this coming-of-age story examines a correctional path that is both hopeful and destructive. As these seasonal blazes rage across California, over 3,000 professional firefighters and 3,000 volunteer inmates battle the fires for many months on end, sometimes into the winter. Pine Grove firefighters have fought in all of the deadliest and largest fires in California’s recent history, including the Camp and Mendocino Complex fires of 2018. 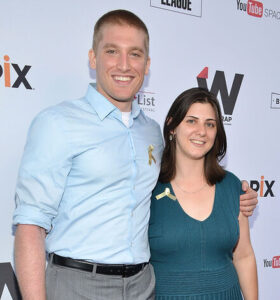 Without incarcerated firefighters, California would not be able to manage the growing intensity of fire season. The employment of inmate firefighters– and the opportunities and challenges that await them upon their release from prison– are at the heart of Fireboys. Co-Directors Jake Hochendoner and Drew Dickler join us for a conversation on the challenges of tracking the lives of the incarcerated in the CalFire program over a 5-year span, gaining the confidence of the prison and Pine Grove facility and how the intersection of incarceration, the personal history of the incarcerated and criminal justice reform plays out in the telling of the Fireboys.

For news and updates go to: fireboysdoc.com

Directors Statement – As a filmmaking team, we’ve spent eight years collaborating on social justice films that center the experiences of people impacted by complex and urgent social issues. After we made a short film about mass incarceration and reentry, we were driven to tell more stories about the American justice system. In 2015, we began researching California’s use of around 3,000 incarcerated firefighters living and working in conservation “fire” camps who are trained to combat mounting yearly wildland fires. These incarcerated firefighter camps were touted as progressive programs because of a track record of success measured by low recidivism rates, but very little documentation existed about the experiences of the firefighters and what actually happened to them post-release – despite the fact that these programs have been in existence since 1945.  Combining immersive observational storytelling, intimate interviews, and lyrical cinematic scenes of California’s wildland, Fireboys explores the topics of confinement, labor exploitation, rehabilitation, redemption, and resilience in the prison system from the point of view of young men from the ages of 18-22 in the unique position of being the only incarcerated firefighters in California’s juvenile justice system. We hope Fireboys will make audiences aware of the impact of incarceration, the extraordinary potential of those currently inside, and the need of a justice system built on restoration and opportunity, not punishment. – Drew Dickler and Jake Hochendoner

About the filmmaker – Jake Hochendoner is an award winning filmmaker, video producer and educator living in Dallas, Texas. His creative and professional work is driven and informed by a deep passion for social and environmental justice aimed at building a more equitable, inclusive and healthy world. His award winning short documentary films focused on complex social issues, ranging from mass incarceration to the opiate epidemic, have screened around the country at the Cleveland International Film Festival, The Wrap’s Shortlist Film Festival in Los Angeles and the Impugning Impunity Human Rights Documentary Film Festival in New York City. In 2016, Jake received a Creative Workforce Fellowship from Cuyahoga County to support his filmmaking and teaching in Northeast Ohio prisons. In 2018, he won a New England/Boston Emmy award for producing and co-directing “Meet the Inmates of Fife & Drum” for Zagat. His recent work includes a series of short documentaries for Google Earth and he held positions as an additional cinematographer on Jennifer Redfearn’s APART (2020) and Karla Murthy’s THE PLACE THAT MAKES US (2020). Fireboys is his first feature film.

About the filmmaker – Drew Dickler (she/her) is a filmmaker and producer based in Brooklyn, New York. Much of her work explores themes of identity, resilience, and social equity. Her debut short DRESS, a butch lesbian coming-of-age drama, won Best LGBT Film at the Independent Filmmakers Showcase. Drew’s award-winning short documentaries have screened at film festivals across the country. ALL IT TAKES, focused on the opiate epidemic, premiered at the 2016 Cleveland International Film Festival. MEET THE INMATES OF FIFE & DRUM, about a unique culinary reentry program, won a 2018 regional Emmy award. Most recently, Drew was a field producer for APART, directed by Jennifer Redfearn (2020 Full Frame, Hot Docs), and has directed branded content for companies like Google and Barnes & Noble. FIREBOYS is her first feature.

“There’s not a lot of the exciting firefighting stuff you might expect; Fireboys’ focus is more on rehabilitation through tough work that some grow to love.” – Dennis Harvey, 48 Hills

“Fireboys opens your eyes to the prison system, attempts at rehabilitation, and what it truly takes to help someone change for the better.” – Chris Salce, Film Threat

“The directors gratifyingly zero in on the well-behaved prisoners, their respectful instructors/jailers and uplifting evidence that the youths are turning their lives around and are pleased to help others.” – Bob Strauss, San Francisco Chronicle

“A fascinating documentary about a program many people have probably never heard of. An emotional real life coming of age story.” – Nathaniel Muir, AIPT