Winner of the first-ever Library of Congress Lavine/Ken Burns Prize for Film, 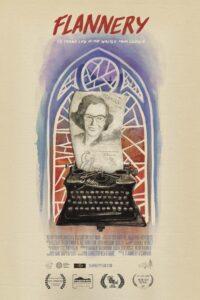 Elizabeth Coffman and Mark Bosco’s documentary FLANNERY is the lyrical, intimate exploration of the life and work of author Flannery O’Connor, whose distinctive style influenced a generation of artists. A devout Catholic who collected peacocks and walked with crutches (due to a diagnosis of lupus that would take her life before the age of 40), O’Connor’s provocative, award-winning fiction about Southern prophets, girls with wooden legs, and intersex “freaks” was unlike anything published before (or since). Over the course of her short-lived but prolific writing career (two novels, 32 short stories and numerous essays and lectures), O’Connor never shied away from examining timely themes of racism, religion, socio-economic disparity, and more with her characteristic wit and irony. Including conversations

with those who knew her and those inspired by her (Mary Karr, Hilton Als, Tommy Lee Jones, Lucinda Williams, and more), FLANNERY employs never-before-seen archival footage, newly discovered personal letters and her own published words (read by Mary Steenburgen) alongside original animations and music to examine the life and legacy of an American literary icon. Co-director Elizabeth Coffman and Mark Bosco join us to talk about the life and work of a writer and cartoonist who’s trenchant worldview and powers of observation provided her stories with a window into the soul of subjects that resonates to this day.

For news, screenings and updates go to: flanneryfilm.com

*Flannery O’Connor was recently the subject of a provocative article by Paul Elie in The New Yorker, in which he quotes personal letters, and other writings, to question her attitudes on race. This is certainly a contentious and timely issue. We also note that earlier this month, The New York Times critic Wesley Morris named her 1965 short story, “Everything That Rises Must Converge,” as an example of “Art That Confronts and Challenges Racism.”

The Modern Consciousness: A FLANNERY Discussion Series, a four-part weekly series of virtual panel discussions on O’Connor’s legacy, will be presented concurrent with the run, with a new discussion every Monday from July 20 – August 10. Each part will cover a different topic (race, faith, disability, and craft). More details TBA.

“‘Flannery’ is an extraordinary documentary that allows us to follow the creative process of one of our country’s greatest writers.” — Ken Burns, Oscar-nominated Documentarian

“A lively and insightful documentary that explores the troubled life and unblinking writing of Flannery O’Connor.” – Christopher Lloyd, The Film Yap

“If the mission of the filmmakers was to get people interested in reading her works again, they’ve done admirable work.” – Steven Prokopy, Third Coast Review

“Despite having a certain squareness that puts it slightly at odds with its subject, “Flannery” does succeed in its ultimate objective — after watching it, you will want to instantly get a hold of and read as much of Flannery O’Connor’s work as you can.” – Peter Sobczynski, eFilmCritic.com