Anthony Baxter’s Flint: Who Can You Trust? exposes the political 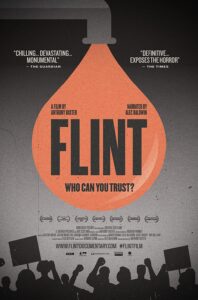 arrogance and constant danger facing thousands of Flint, Michigan residents. Caused, in large part, by the actions of an unelected governing body, made up of unelected political hacks appointed by the governor. On April 25, 2014, for reasons that remain shrouded in mystery, Michigan governor Rick Snyder signed off on an order that switched the source of Flint water system from the Lake Heron of Great Lakes to the Flint River. That decision resulted in  the poisoning Flint residents and leading to 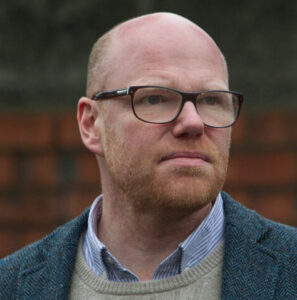 one of the worst human-caused environmental disasters in American history. Award-winning journalist / filmmaker Anthony Baxter’s FLINT: WHO CAN YOU TRUST goes beyond the headlines to investigate the escalating betrayal and deceit by government

officials, the breakdown in public trust and faith in official science, and ultimately, the community’s enduring fight for one of our most basic rights: clean water. Director and Producer Anthony Baxter (You’ve Been Trumped, You’ve Been Trumped Too) joins us for a conversation on his searing indictment of local, state, and federal governance, merciless scammers, junk science, charlatans, systemic racism, social and political indifference that is still costing thousands innocent  people their dignity, health and for too many, their lives.

For updates and screenings go to: Flintdocumentary.com

To watch go to: flintdocumentary.com/watchnow

About the filmmaker – Director / Producer Anthony Baxter is one of the UK’s leading documentary filmmakers. His iconic You’ve Been Trumped (2011) won 12 awards and is recognized as one of the most important British feature documentaries of the last decade. Translated into a dozen languages, the film was aired in prime time on BBC2 in 2012. In the United States, the it was acquired by Netflix and Participant Media. Baxter’s A Dangerous Game (2014), a searing indictment of the profound ecological and social impact of luxury golf resorts around the world, enjoyed a major UK theatrical release and featured Donald Trump, Alec Baldwin, Robert Kennedy Jr. and a cast of inspiring local heroes. A TV version was broadcast on the BBC. You’ve Been Trumped Too (2016) was released on the eve of the US Presidential vote, and critically acclaimed as a powerful and prescient warning of the nature of a Trump Presidency.

“There could hardly be a more urgent or relevant film than this” – Peter Bradshaw, The Guardian.

“Bound to become only more insightful as time wears on, for better or worse.” – Stephen Saito, Moveable Fest

“Anthony Baxter’s Flint is one hell of an exposé. Flint is a vital movie for a volatile time.” – Musanna Ahmed, Film Inquiry

“It is a good job someone was there to record it, because it is a tale that would challenge even the most credulous.” – Lucy Mangan, Guardian