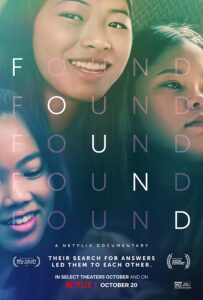 teenage girls—each adopted from China—who discover they are blood-related cousins on 23andMe. Their online meeting inspires the young women to confrot the burning questions they have about

their lost history. When they meet for the first time, they embark on a once in a lifetime journey to China in search of answers. Director Amanda Lipitz (Step) joins us to talk about the logistical, physical and emotional gauntlet that these young women signed up for in order to answer, or attempt to answer deeply personal questions about each of their lives as well as the support and love they show for one another.

To watch go to: netflix.com/FOUND

For more go to: amandalipitzproductions.com/documentary

About the filmmaker – Amanda Lipitz’s second documentary, FOUND, which she directed and produced with Impact Partners and Kindred Spirit Productions, is set to be released on Netflix in October 2021. Her first feature-length documentary, STEP, premiered in competition at the 2017 Sundance Film Festival and won the Special Jury Award for Inspirational Filmmaking. Additionally, STEP was awarded the NAACP Image Award for Best Documentary, the African American Critics Choice Award for Best Documentary, the Lena Sharpe Award for Persistence of Vision at the Seattle International Film Festival and the Audience Award at the AFI Docs Festival. Amanda co-created and directed Motherhacker, a scripted podcast with Gimlet Media and Spotify starring Carrie Coon, and is currently developing a television adaptation. Known nationally for her films highlighting philanthropic organizations and their impact, Lipitz has made more than 30 shorts for organizations such as the Young Women’s Leadership Network, Citymeals on Wheels, College Bound Initiative, The Tory Burch Foundation, Barnard College, Turnaround for Children, The Gateway School and many more. Broadway producing credits include Dirty Rotten Scoundrels, Legally Blonde the Musical, The Performers, A View From the Bridge (Tony Award, Best Revival) and The Humans (Tony Award, Best Play). Off Broadway, Amanda developed and produced Brooklynite at The Vineyard Theatre. On television, Amanda served as executive producer and creator of MTV’s groundbreaking series “Legally Blonde the Musical: The Search for Elle Woods.” Lipitz graduated with a BFA in theater from New York University’s Tisch School of the Arts. Amanda lives in New York City with her husband, two daughters, and son. For more go to: amandalipitzproductions.com/documentary

“What Ms. Lipitz does render quite believable is the level of relief, love, joy and even guilt involved in the girls’ coming to terms with their people, and themselves. And how it all might well resolve in tears.” – John Anderson, Wall Street Journal

“It’s stunning to hear that each nanny remembers the girls so clearly. Are these true memories or wishful thinking? Maybe it doesn’t matter.” – Nina Metz,

“Wonderfully emotional and would be a good companion piece with [the documentary] One Child Nation.” – Claudia Puig, FilmWeek (KPCC – NPR Los Angeles)

“Its comfort with ambivalence and ambiguity proves a strength, allowing the girls and their loved ones the space to work through confusing or contradictory emotions without trying to tie them up in neat little conclusions.” – Angie Han,