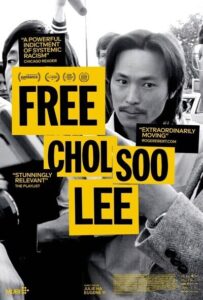 1973 with the of a man was murdered in a busy intersection of San Francisco’s Chinatown as part of an ongoing gang war. Chol Soo Lee, a 20-year-old Korean immigrant, who had previous run-ins with the law, was arrested and convicted based on flimsy evidence and the eyewitness accounts  of white tourists who couldn’t distinguish between Asian features. Sentenced to life in prison, Chol Soo Lee would spend years

fighting to survive behind bars before journalist K.W. Lee took an interest in his case. The intrepid reporter’s investigation would galvanize a first-of-its-kind pan-Asian American grassroots movement to fight for Chol Soo Lee’s freedom, ultimately inspiring a new

generation of social justice activists. Revisiting this pivotal yet largely forgotten story, filmmakers Eugene Yi and Julie Ha draw from a rich archive as well as firsthand accounts of those inspired to come to Lee’s defense. But even as Free Chol Soo Lee explores this miscarriage of justice, the film also reveals the man behind the cause, and the complex legacy — and human cost — of becoming the symbol of a movement.

For updates go to: fcsl-film.com

Where to watch go to: mubi.com/freecholsoolee

About the filmmaker – Julie Ha’s storytelling career spans more than two decades, in both ethnic and mainstream media, with a specialized focus on Asian American stories. She worked as an editor for 10 years at KoreAm Journal, a national Korean American magazine, and served as its editor-in-chief from 2011 to 2014, during which time she led award-winning coverage of the 20-year anniversary of the Los Angeles riots. She has written for the Hartford Courant in Connecticut, the Rafu Shimpo, a Los Angeles-based Japanese American newspaper, and the Los Angeles Times. Her feature stories have earned her awards from New American Media and the Society of Professional Journalists.  In 2018 the Korea Economic Institute of America honored her for her contributions to journalism. A graduate of UCLA, where she studied English-American Studies and worked as a student editor, she is a past board secretary of the Asian American Journalists Association, Los Angeles Chapter, and a founding board member of the late ’90s reboot of Gidra, a progressive Asian American magazine that originated in 1969. Free Chol Soo Lee, which made its world premiere at the 2022 Sundance Film Festival, is her first documentary film.

About the filmmaker – Eugene Yi is a filmmaker, editor and journalist. His film editing work has premiered at Berlin International Film Festival, Sundance Film Festival, TriBeCa Film Festival, and others. Selected titles include the Emmy-nominated Farewell Ferris Wheel, a documentary about guestworkers in the carnival industry, and Out of My Hand, a fiction-documentary hybrid which was nominated for an Independent Spirit Award, and won the Grand Jury Prize at the 2015 Los Angeles Film Festival. His web video work has been in The New York Times, CNN, Frontline, the Washington Post, Buzzfeed News, Al Jazeera, and Deadspin. He served as assistant editor on Inside Job (2010), which won the Academy Award for Best Documentary. He was named one of the 2017 National MediaMaker Fellows with the Bay Area Video Coalition, for Free Chol Soo Lee. He teaches at the Edit Center, a school for film editing based in Brooklyn. Yi’s print journalism has been honored with numerous awards, including the LA Press Club Award for his oral history of the 1992 Los Angeles unrest from the Korean American perspective for KoreAm Journal. He is a native of Los Angeles and a graduate of Brown University, where he studied neuroscience.

“As much as it celebrates the exoneration of its subject, a Korean immigrant in California named Chol Soo Lee, this documentary… is concerned with how the consequences of the failure of justice rippled through the rest of his life.” – Ben Kenigsberg, New York Times

“It deliberately and pointedly asks far more questions than it can ever answer, questions it quietly implores the audience to take home, to debate, to take to the ballot box and the court room.” – Richard Whittaker, Austin Chronicle

“Ha and Yi combine careful editing and sensitive direction to ultimately deliver a shocking and sobering insight into a normal guy, whose only ‘crime’ is looking different” – Katie Smith-Wong, Flick Feast

“Directors Julie Ha and Eugene Yi craft a powerful indictment of systemic racism and the criminal justice system, while providing Lee a chance to have agency and tell his story through his own words.” – Josh Flanders, Chicago Reader