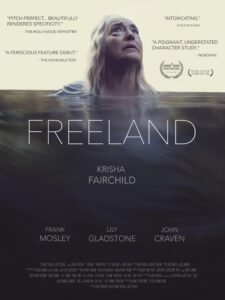 strains for decades on the remote homestead she built herself. But when cannabis is legalized, she suddenly finds herself fighting for her survival. In tour-de-force performance, Krisha Fairchild (Devi) brings the timely, real-world story of black-market growers battling to survive to the screen. Featuring a heart-breaking turn by John Craven (UPSTREAM COLOR) as an old flame from Devi’s commune days,

and Frank Mosley and Lily  Gladstone (CERTAIN WOMEN) as young workers adrift and bringing in the harvest, the film is full of standout performances that bring this very real community of fiercely independent characters to life. Set against the lush backdrop of the redwood

imbue this emotional thriller with a deep and empathetic authenticity. They join us for a conversation on the challenges and rewards of embedding themselves into a notoriously closed community, bringing their experience as documentarian filmmakers into the narrative realm as well as working with a superb group of actors.

For news, updates and screenings go to: freelandfilm.com

About the filmmaker – Kate McLean (Writer/Director) is a critically-acclaimed filmmaker and documentary producer. Three of her short docs have been in the NYTimes Op-Docs series. She is a producer on BILL NYE: SCIENCE GUY (SXSW 2017) and WE ARE AS GODS (SXSW 2020).

About the filmmaker – Mario Furloni (Writer/Director/DP) is a Brazilian-born director and cinematographer based in the Bay Area. Aside from the films he has directed with Kate McLean, he is the cinematographer and co-producer of the critically-acclaimed documentary THE RETURN, which won the Audience Award at Tribeca 2016 and was nominated for Emmy and Peabody awards.

“There’s a veracity to Freeland that works, and it’s matched in Fairchild’s emotional performance, one that captures the fear and depression that comes with recognizing the world may be moving on without you.” — Roger Ebert

“[An] introspective, succinct mood piece enriched by Fairchild’s phenomenal lead performance and the artistic vision of two compassionate filmmakers in tune with the essence of their craft” — The Playlist

“[Krisha Fairchild has] one of the most commanding faces in recent American cinema” – Eric Kohn, INDIEWIRE