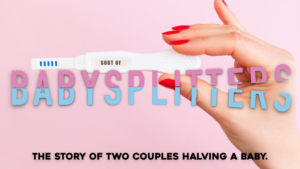 Flight Attendant”), second feature film is the comedic gem Babysplitters. Jeff and Sarah are struggling to come to an agreement about having a baby.  Jeff wants to be a father eventually, but is afraid to lock himself into his current job situation. Meanwhile Sarah, nearing 35, feels her biological clock ticking and is impatient to start trying.  Their mutual friends Don and Taylor have the opposite problem.  Don

has a successful business and is ready to be a dad.  But Taylor, an aspiring dancer, is worried that the toll on her body and career will be too much.  When the two couples hatch a plan to share one baby between them, it seems like they may have found the perfect compromise — until things spiral out of control. Winner of the Panavision Spirit Award for Independent Cinema at Santa Barbara Film Festival, Babysplitters is screening at the 2019 Newport Beach Film Festival. Director and writer Sam Friedlander joins us to talk about his wry, playful take on young couple willing to go to any length in hope of starting a new family.

For news and updates go to: babysplittersmovie.com

“Whether it’s a conversation about triple-earlobes or a private confession to a therapist, Babysplitters gets its comedy right.” – Alex Saveliev