Ollie (Tessa Thompson) is barely getting by in Little Woods, an economically 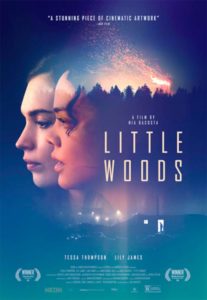 depressed fracking boomtown in North Dakota. She has left her days of illegally running prescription pills over the Canadian border behind, eyeing a potential new job that would finally break her out of the small town. But when her mother dies, she is reunited with her estranged sister Deb (Lily James), who faces a mounting crisis: the combined effect of an unplanned pregnancy and a deadbeat ex (James Badge Dale). The two find they have one week to settle the mortgage on their mother’s house or face foreclosure. As both bills and pressure mount, Ollie faces a choice: whether to return to a way of life she thought she’d left behind for just one more score, or to leave it all behind. Writer-director Nia DaCosta’s debut is an emotionally

charged small-town thriller that weaves themes of economic downturn and the opioid crisis into its intimate story of two sisters trying to get by. An unvarnished film anchored by an authentically drawn sibling bond, LITTLE WOODS speaks to both the biggest and smallest elements of the working-class struggle in rural America. Director and writer Nia DaCosta joins us for a conversation on her debut feature film and the crushing burden of a life without options or access to opportunity or education and the toll it takes on well intentioned people.

For news and updates go to: littlewoodsmovie.com/home

“DaCosta has made a suspense film in which we root for the heroes to break the law, and then she sends us home to ponder all the reasons they need to.” – Ty Burr, Boston Globe

“The film smartly never goes the direction one might assume, embracing full-blown character study that shines a scorching light on many prevailing problems within the underclass of American society” – Robert Kojder, Flickering Myth

“Little Woods is a story we don’t often see told from a black woman’s lens, especially not in this particular setting. It’s a story of sisters who band together and fight against every complication.” – Aramide Tinubu, Shadow and Act