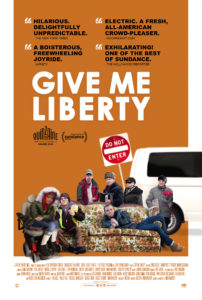 driver and an immigrant, director Kirill Mikhanovsky, with writer Alice Austen, create a raw feature film about the comedy and  heartbreak of people in the underprivileged communities living in a struggling American city. Medical transport driver Vic (newcomer Chis Galust) is running late, but it’s not his fault. Roads are closed for a protest, and no one else can shuttle his Russian grandfather and his emigre friends to a funeral. The new route uproots his scheduled clients, particularly Tracy (Lauren “Lolo” Spencer in a breakout performance), a vibrant young woman with ALS. As the day goes from hectic to off-the-rails, their collective ride becomes a hilarious,

compassionate and intersectional portrait of American dreams and disenchantment. The characters in GIVE ME LIBERTY are drawn from the people of Milwaukee – they’re magnificently diverse and their struggle to survive is desperate, contradictory, funny and moving. Director Kirill Mahanovsky joins us for a spirited conversation on working with a cast of mostly non-professional actors, drawing upon his own work history for the story behind the film and the importance of making Give Me Liberty in his adopted hometown of Milwaukee.

For news, screenings and updates go to: givemelibertyproductions.com

About the filmmaker: Russian-born Kirill Mikhanovsky grew up in Moscow where his early passion for cinema compelled him to skip school and go to the movie theatre across the street from his home where, often as the only person in the house, he watched countless films. After the Soviet Union collapsed, Mikhanovsky immigrated to Milwaukee, where he had a series of odd jobs, including driving medical transport for people with disabilities, and began making films. After graduating from NYU Film School, Mikhanovsky went on to make films in the US, Brazil, Russia, and South America. A Sundance Alum, his first feature SONHOS DE PEIXE won the Critics Week at the Cannes Film Festival.

“Completely, delightfully unpredictable from scene to scene, ‘Give Me Liberty’ draws you in with its moving performances and blasts of broad comedy.” – Manohla Dargis, THE NEW YORK TIMES

“A wonderfully anarchic dark comedy, which deftly welds its frenetically farcical structure to a humanistic portrait of marginalized communities thrown together.” – David Rooney, THE HOLLYWOOD REPORTER