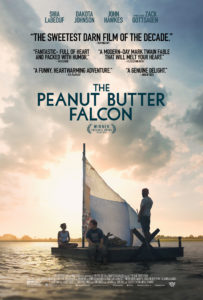 Mark Twain that begins when Zak (Gottsagen), a young man with Down syndrome, runs away from a nursing home where he lives to chase his dream of becoming a professional wrestler and attending the wrestling school of The Salt Water Redneck. Through circumstances beyond their control Tyler (LaBeouf), a small time outlaw on the run, becomes Zak’s unlikely coach and ally. Together they wind through deltas, elude capture, drink whisky, find God, catch fish, and convince Eleanor (Johnson), a kind nursing home employee with a story of her own, to join them on their journey. THE PEANUT BUTTER FALCON stars Shia LaBeouf, Dakota Johnson, Thomas

Haden Church, Bruce Dern, John Hawkes and newcomer, Zack Gottsagen, premiered back in March at SXSW and was a huge critical success, with a current score of 100% on Rotten Tomatoes. The film also won over fans, taking home the Audience Award for Narrative Spotlight. Co-directors and co-writers Michael Schwartz and Tyler Nilson stop by to talk about there experiences and the stacks of miracles that brought this heart-warming tale of friendship and reaching for your dreams.

For news, screenings and updates go to: thepeanutbutterfalconmovie.com

“LaBeouf brings the soul to “The Peanut Butter Falcon,” while Gottsagen brings the spirit. He has an undeniably charming screen presence, and the actor takes to this starring role with gusto.” – Katie Walsh, Los Angeles Times

“What’s clear is that a lot of development time, movie resources, and A-List actors all came together to make a masterpiece of a film centering on one person…Zack Gottsagen.” – Alan Ng, Film Threat

“‘The Peanut Butter Falcon’ is a sweet, warm story about dreams and the family you choose. Zack Gottsagen is pure comedy. Shia LaBeof is giving me sexy, scruffy with substance and the pairing of these two on screen is perfection.” – Carla Renata, The Curvy Film Critic