Written & directed by Michele Remsen (“Juke,” “Two in the Morning”),  Toss It will 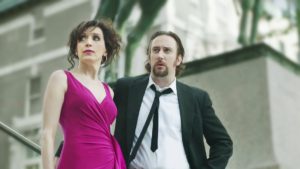 seem a perfect match — then everything gets tossed. Finn wonders why he’s so fucked up, and Emily wonders why she’s so drawn to him. A younger couple, sophisticated parents, a wise great-uncle, and a flaky friend impact both, driving them apart until they take a leap. Then a major curve-ball hits, the curtain gets pulled-back on dearly held traditions and reveals what made them who they are. Discovering the real-deal goes down in back-hallways, Finn and Emily kick against convention to find some kind of truth of their own. Toss It explores women as the real power players because women, by and large, run and nurture the fundamental unit of society: family. Director and screenwriter joins us to talk about love, relationships, fast-paced filmmaking and writing modern day cinematic dialog.