A looming disaster in one of the most spectacular environments 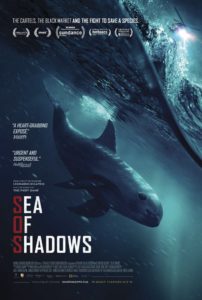 on Earth sparks a rescue mission unlike any other in SEA OF SHADOWS, a riveting new documentary with the intensity of a Hollywood thriller from National Geographic Documentary Films and winner of the Sundance audience award. When Mexican drug cartels and Chinese traffickers join forces to poach the rare totoaba fish in the Sea of Cortez, their deadly methods threaten to destroy virtually all marine life in the region, including the most elusive and endangered whale species on Earth, the vaquita porpoise. SEA OF SHADOWS follows a team of dedicated

scientists, high-tech conservationists, investigative journalists and courageous undercover agents as well as the Mexican Navy as they put their lives on the line to save the last remaining vaquitas and bring the vicious international crime syndicate to justice. Director Richard Ladkani (The Ivory Game, The Devil’s Miner) talks about the monumental challenge of saving a highly intelligent mammal from a desperately poor community who see the black market totoaba and the vaquita as a way to spare their family from a life of poverty and degradation.

For news and updates go to: nationalgeographic.com/films/sea-of-shadows

For screening information go to: nationalgeographic.com/films/sea-of-shadows

For more about the filmmaker:

“Sea of Shadows is truly horrifying.” Danielle Solzman, Solzy at the Movies

“Ladkani has a way with conveying just how big the stakes are and brings them to land.” – Stephen Saito, Moveable Fest

“Sea of Shadows may still raise awareness about the plight of other sea creatures still under threat from illegal nets sweeping the bottom of the ocean, killing everything unfortunate enough to swim in its wake.” – Monica Castillo, Remezcla