After he’s attacked on the street at night by a roving motorcycle gang, timid 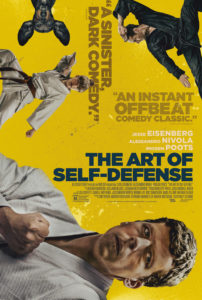 bookkeeper Casey (Jesse Eisenberg) joins a neighborhood karate studio to learn how to protect himself. Under the watchful eye of a charismatic instructor, Sensei (Alessandro Nivola), and hardcore brown belt Anna (Imogen Poots), Casey gains a newfound sense of confidence for the first time in his life. But when he attends Sensei’s mysterious night classes, he discovers a sinister world of fraternity, brutality

and hyper-masculinity, presenting a journey that places him squarely in the sights of his enigmatic new mentor. Audacious and offbeat, The Art of Self-Defense is an original dark comedy that takes toxic masculinity to absurd extremes. Director Riley Stearns joins us for a lively conversation on this wildly inventive, surreal black comedy.

For news and updates go to: bleeckerstreetmedia.com/theartofselfdefense

For screening info go to: theartofselfdefense-tickets.com

twitter.com/The Art of Self Defense

“The Art of Self-Defense manages to clarify the filmmaker’s intriguing vision by stuffing it into a remarkably unnerving character study.” – Eric Kohn, indieWire

“”The Art of Self-Defense” may be presented as an absurdist satire, but like the best American comedies… it doubles as a keen critique of our national character.” – Peter Debruge, Variety

“’Fight Club’ by way of Yorgos Lanthimos, Riley Stearns’ screed on “might is right” toxic masculinity is a giggly black comedy that cowers down a twisty-turny rabbit hole.” – Matt Oakes, Silver Screen Riot

“It emerges as a strong early contender for best film of the year.” – Bobby LePire, Film Threat

“The Art of Self-Defense is not only a must-see, it’s an easy contender for the best film of the year so far.” – Kevin L. Lee, Film Inquiry