FOR SAMA is both an intimate and epic journey into the female experience of war. A love letter from a young mother to her daughter, the film tells the story of 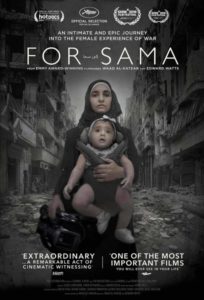 Waad al-Kateab’s life through five years of the uprising in Aleppo, Syria as she falls in love, gets married and gives birth to Sama, all while cataclysmic conflict rises around her. Her camera captures incredible stories of loss, laughter and survival as Waad wrestles with an impossible choice– whether or not to flee the city to protect her daughter’s life, when leaving means abandoning the struggle for freedom for which she has already sacrificed so much. FOR SAMA took home the Best Documentary Award at this year’s 2019 Cannes Film Festival, FOR SAMA had its world premiere at SXSW Film Festival where it won the Grand 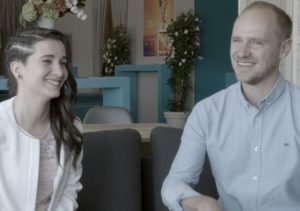 Jury Prize and the Audience Award for Best Documentary.  Since then, it continues to gather more awards every time it screens.  The growing awards list includes the aforementioned SXSW; Cannes Film Festival; and Sheffield Doc/Fest; Telluride MountainFilm; Nantucket Film Festival; River Run; LA Asian Pacific Film Festival; Hot Docs; and Newport Beach Film Festival. Co-directors Waad al-Kateab and Edward Watts join us for a conversation on the courage to document the unimaginable horror of a brutal regime and what it means to believe in something so deeply that you are willing to risk everything for it.

For news, screenings and updates go to: ForSamaFilm.com

For Sama – Q&A with directors Waad al-Kateab and Edward Watts and  Dr. Hamza al-Kateab following the 4:30 pm show on Sunday, 7/28.

“For Sama is undoubtedly difficult to watch, but you cannot close your eyes when watching such an urgent film. An endlessly powerful and absolutely essential work, it’s a must-see when it is released this autumn.” – Musanna Ahmed, Film Inquiry

“If not turning away is how we must confront the violence, inhumanity and senselessness of war, this brutal, heart-wrenching film is essential viewing.” – Loren King, AWFJ Women on Film

“For Sama is an astonishing achievement. A moving memorial to all who died in the pursuit of freedom.” – Rob Aldam, Backseat Mafia