Big Data has surpassed oil as the world’s most valuable asset. It’s being 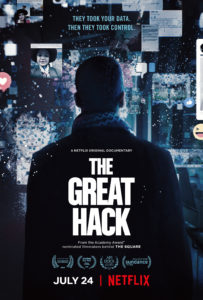 weaponized to wage cultural and political warfare. People everywhere are in a battle for control of our most intimate personal details. From award-winning filmmakers Karim Amer and Jehane Noujaim, THE GREAT HACK uncovers the dark world of data exploitation with astounding access to the personal journeys of key players on different sides of the explosive Cambridge Analytica/Facebook data scandal. Academy-Award nominees Amer and Noujaim (The Square, Control Room, Startup .com) continue their tradition of

exploring the seismic ripples of social media with this riveting, complex film. THE GREAT HACK forces us to question the origin of the information we consume daily. What do we give up when we tap that phone or keyboard and share ourselves in the digital age? THE GREAT HACK is co-directed by Karim Amer and Jehane Noujaim, with a production team led by Geralyn Dreyfous, Judy Korin and Pedro Kos. Karim Amer and Jehane Noujaim join us to talk about Big Data, the expectation of privacy and where we go from here.

For news and updates go to: thegreathack.com

“You leave with a clear sense of how one company [sold] democracy down the river, not to mention having your fingernails chewed down to the quick.” – David Fear, Rolling Stone

“A thrilling yarn of political espionage and fascinating characters… However, this isn’t hollow entertainment. The film insists upon the gravity of the situation, toggling effortlessly between the micro and the macro lens on this tale.” – Katie Walsh, Tribune News Service

“[A] gripping, challenging documentary by Karim Amer and Jehane Noujaim, about the biggest scandal of our time: the gigantic question mark over the legality of the Brexit vote.” – Peter Bradshaw, Guardian

“Pondering individual data rights and the sinister side of widespread connectivity, co-directors Jehane Noujaim and Karim Amer diligently inspect how our innocent likes and shares became the building blocks of Brexit and Trump.” – Tomris Laffly, Time Out