ICE ON FIRE, an eye-opening documentary that focuses on many never-before-seen solutions designed to slow down our escalating environmental crisis, goes 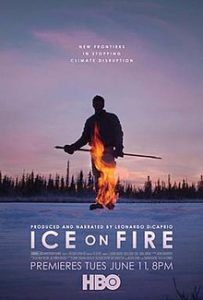 beyond the current climate change narrative and offers hope that we can actually stave off the worst effects of global warming. Eleven years after Conners’ first collaboration with Executive Producer Leonardo DiCaprio on “The 11th Hour,”which emphasized the problems of climate change, ICE ON FIRE instead focuses on the cutting-edge research behind today’s climate science – and the innovations aimed at reducing carbon in the atmosphere, which could pave the way for a reduction in the global temperature rise and a benefit to the planet’s life systems. ICE ON FIRE emphasizes the importance of an immediate, two-pronged

approach to reversing the crisis: reducing carbon emissions through traditional renewable energy sources and new ones, like tidal energy, and implementing “drawdown” measures, focusing on methods for drawing down and sequestering carbon, including direct air capture, sea farms, urban farms, biochar, marine snow, bionic leaves and others. Director Leila Conners joins us to talk about the looming catastrophe and the emerging and encouraging techniques and technologies that can provide a sustainable path forward.

For news and updates go to: www.treemedia.com

Ice on Fire is currently screening at: www.hbo.com

“Putting quibbles about pitch and approach aside… as a beginners’ guide to Arctic thaw and its consequences this is pretty exemplary stuff.” – Les;ie Felperin, Hollywood Reporter

“Ice on Fire is a “call to action” documentary. It’s an eye-opener for anyone prone to a stultifying “doomsday mentality” and that is unequivocally a good thing.” – Amy Glynn, Paste

“Should be essential viewing for anyone who plans to carry on living on the planet…” – Wendy Ide, Screen International