THE EDGE OF DEMOCRACY is a cautionary tale for these times of democracy in crisis, the personal and political fuse to explore one of the most dramatic periods in Brazilian history. 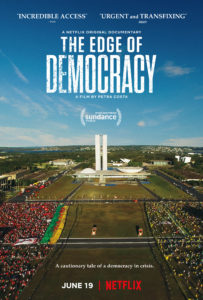 THE EDGE OF DEMOCRACY captures the  personal journey of filmmaker Petra Costa (ELENA, Olma and the Seagull) into politics watching her country fall into disarray, echoing the undoing of so many democracies around the world. Combining unprecedented access to leaders past and present, including Presidents Dilma Rousseff and Lula da Silva, Costa witnesses their rise and fall and the tragically polarized nation that remains. Through the stories of her mother and father, Costa documents the rebirth of a democratized Brazil following years of authoritarian rule under a military dictatorship. She traces the impeachment of Rousseff,

the imprisonment of de Silva, and the rise of the far right. Was Brazil’s democracy a short-lived dream? Merging the personal and the political, Costa delves to the heart of her country’s unfolding identity crisis, examining widespread institutional corruption

while connecting her own family’s complex past to Brazil’s current crisis. Capturing a unique historical moment, A NETFLIX original documentary production, THE EDGE OF DEMOCRACY examines the forces at play in the global erosion of democracy. Director Petra Costa joins us for a conversation about Brazil’s past, present and future and how the political trajectory of her beloved country is increasingly relevant to our own.

The Edge of Democracy is available at: netflix.com

For more about the filmmaker go to: petracosta.com

“Directed by Petra Costa, this completely fascinating documentary provides an unexpectedly compelling inside look at the political earthquakes that have been roiling Brazil for several years.” – Kenneth Turan, Los Angeles Times

“It’s a chronicle of civic betrayal and the abuse of power, and also of heartbreak.” – A.O. Scott, New York Times

“[Petra Costa] seems utterly incapable of crafting a frame that is lacking in urgency or vibrance.” – Matt Fagerholm, RogerEbert.com

“A dense, complex undertaking Costa impressively wraps her arms – and our minds – around, made even more daunting by the dual purpose “The Edge of Democracy” serves as both an immediate witness to an extraordinarily precarious historical moment.” – Stephen Saito, Moveable Fest