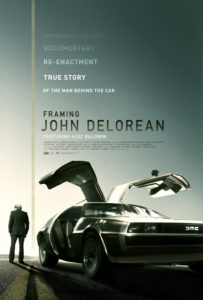 DeLorean is the stuff of a Hollywood screenwriter’s dreams. But who was the real John DeLorean? To some, he was a renegade visionary who revolutionized the automobile industry. To others, he was the ultimate con man. For the first time, Framing John DeLorean recounts the extraordinary life and legend of the controversial automaker, tracing his meteoric rise through the ranks of General Motors, his obsessive quest to build a sports car that would conquer the world, and his shocking fall from grace on

charges of cocaine trafficking. Interweaving a treasure trove of archival footage with dramatic vignettes starring Alec Baldwin, Framing John DeLorean is a gripping look at a man who gambled everything in his pursuit of the American Dream. Co-directors Don Argott (The Art of the Steal) and Sheena M. Joyce (The Atomic States of America) talk about the complex, brilliant and driven man behind the salacious headlines and explore with us just how far was he willing to go to realize his dreams.

For news and updates go to: ifcfilms.com/films/framing-john-delorean

“Most compelling of all are the interviews with the two people who come closest to answering, or at least addressing, the question that overwhelms this entire project: DeLorean’s daughter Kathryn and son Zach.” – ElizabethWeltzman, The Wrap

“Framing John DeLorean is an entertaining, high wire filmmaking experiment that does well by the controversial visionary at its centre.” – Andrew Parker, The Gate