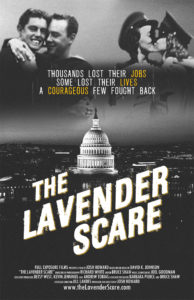 suspected of being homosexual. In 1953, President Eisenhower declared gay men and lesbians to be a threat to the security of the country and therefore unfit for government service. His directive triggered the longest witch hunt in American history. Over the next four decades, tens of thousands of government workers would lose their jobs for no reason other than their sexual orientation. But the actions of the government had an unintended effect. They inadvertently helped ignite the gay rights movement. In 1957, after thousands had lost their jobs, a Harvard-trained astronomer named Frank Kameny became the first person to

fight his dismissal.  His attempts to regain his job evolved into a lifelong fight for the rights of LGBT people. The Lavender Scare is a compelling story of one man’s fight for justice. And it is a chilling reminder of how easy it can be, during a time of fear and uncertainty, to trample the rights of an entire class of people in the name of patriotism and national security. Director Josh Howard (60 Minutes) joins us to talk about Senator Joseph McCarthy, scare tactics, blind prejudice and the willful destruction of thousands of peoples lives.

For news and updates go to: thelavenderscare.com

“Glenn Close’s voice-over is used to try to smooth over jumps forward and backward in time, but keeping all the players here in balance proves difficult for first-time director Josh Howard. – Dan Callahan, The Wrap

“This powerful doc is sadly all too relevant.” – Frank Scheck, Hollywood Reporter

“Thoroughly researched and evidenced, wonderfully detailed, informative and authoritative but always in touch with the human story at its heart. – Jennie Kermode, Eye for Film

“The Lavender Scare is a must watch for everyone in today’s political climate regardless of sexual orientation.” – Beth McDonough, After Ellen