In Patrick Creadon’s illuminating new documentary, HESBURGH, shines a bright light on a unique public figure whom came to light during one of the country’s most divisive political 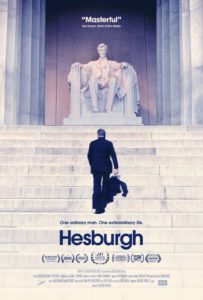 and social storm. His name is Reverend Theodore Hesburgh, C.S.C, president of the University of Notre Dame for more than 35 years. This revered figure worked his entire adult life to advance of peace and equal rights for all people. As the most dynamic member of the U.S. government’s Civil Rights Commission Hesburgh pushed Presidents Dwight Eisenhower and Lyndon Johnson to enact legislation that culminated in the landmark 1964 Civil Rights Act. HESBURGH offers a unique glimpse at more than fifty years of American history. Educator, civil rights champion, advisor to presidents, envoy to popes, theologian and activist, Hesburgh was called on by countless world leaders to tackle the most challenging issues

of the day. He built a reputation as a savvy political operator with a penchant for bridging the divide between bitter enemies. Through it all, he remained a man armed with a fierce intelligence, a quick wit and an unyielding moral compass — a timeless example of bipartisan leadership that would serve us in today’s increasingly polarized times. Director Patrick Creadon (Wordplay, If You Build It , Ski Bum: The Warren Miller Story), joins us for a conversation on a man who’s life’s work harkens back to a time when compromise and cooperation were the political norms and not the exception.

For news and updates go to: hesburghfilm.com

To find a theatre near you go to: hesburghfilm.com/tickets

“This moving, illuminating slice of American life and social history serves as a stirring example that we should all do much better. And we can start right now.” – Ann Hornaday, Washington Post

“A portrait of a man who can be seen as not merely blameless, but genuinely heroic.” – GlennKenny, New York Times

“As described by many of those who, in the movie, talk about Hesburgh, he comes across as a man of conscience and conviction, who was willing to walk his own path no matter whom he rankled or angered.” – Bob Bloom, Journal and Courier