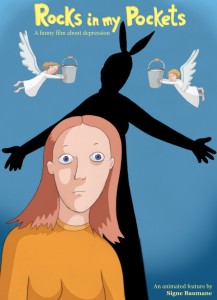 Zeitgeist Films is proud to present the US Theatrical release of ROCKS IN MY POCKETS, the debut animated feature by Signe Baumane. ROCKS IN MY POCKETS had its World Premiere at the 2014 Karlovy Vary Film Festival where it won the FIPRESCI Prize and was the first animated feature ever to take part in the Karlovy Vary International Competition. In the animated gem ROCKS IN MY POCKETS Latvian-born artist and filmmaker Signe Baumane tells five fantastical tales based on the courageous women in her family and their battles with madness. With boundless imagination and a twisted sense of humor, she has created daring stories of art, romance, marriage, nature, business, and Eastern European upheaval—all in the fight for her own sanity. Employing a unique, beautifully textured combination of papier-mâché stop-motion and classic hand-drawn animation (with inspiration from Jan Svankmajer and Bill Plympton), Director Baumane stops by to talk about her poignant and often hilarious tale of mystery, mental health, redemption and survival.

Q & A with Signe Baumane at the Laemelle Royal in Los Angeles Saturday,  September 13th and Sunday, September 14th.

For news and updates on Rocks in My Pockets go to: http://www.rocksinmypocketsmovie.com//

The film will open at the  Laemmle Royal  at 11523 Santa Monica Blvd in Los Angeles on September 12th with a national release to follow.

“Boasting a narrative of extraordinary complexity and density, stuffed with irony, humor and tales-within-tales… a fascinating and very personal look at mental illness, as well as familial and societal dictates and dynamics.” –Alissa Simon, VARIETY

“With ‘Rocks In My Pockets,’ Signe Baumane presents a sharp, surprising and funny animated feature, plumbing the depths of depression via her family history. Guided by Ms. Baumane’s almost musically accented voice-over, this hand-drawn debut feature is based upon the mental struggles of her Latvian grandmother and other relatives. It’s told with remorseless psychological intelligence, wicked irony and an acerbic sense of humor.” – Nicholas Rapold, NEW YORK TIMES

“Signe Baumane examines her family members’ history with mental illness (as well as her own struggles) with humor, delicacy and eye-catching animation techniques… Her commitment and talent is overwhelming, and her production is about as “independent” as it gets. Because Baumane had total control over the movie, we’re treated to splendid and surreal images like these.” – Whitney Matheson, USA TODAY