Building on the promise of his hallucinogenic debut GO DOWN DEATH, filmmaker 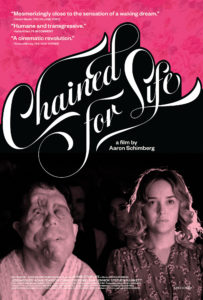 Aaron Schimberg delivers another brilliantly oddball, acerbically funny foray into gonzo surrealism. In a deft tragicomic performance, Jess Weixler (TEETH) plays Mabel, a movie star “slumming it” in an outré art-horror film being shot in a semi-abandoned hospital. Cast opposite her is Rosenthal (UNDER THE SKIN’ s Adam Pearson), a gentle-natured young man with a severe facial deformity. As their relationship evolves both on and offscreen, Schimberg raises provocative questions about cinematic notions of beauty, representation, and exploitation. Tod Browning crossed with Robert Altman crossed with David Lynch only begins to describe something this startlingly original and deeply felt. Director Aaron Schimberg joins us to talk about his hurly-burly, cosmically clever tale of misdirection, expectations and human connection.

Director’s Statement: As a filmmaker with a facial difference, I have never seen my experience accurately represented on screen. This film – the first, as far as I know, made by and starring disfigured people – is my humble attempt to remedy that. When disfigured characters are seen at all in films (usually played by handsome actors with disfiguring latex),

they are trotted out to play monsters or objects of pity, made into vessels for the symbolic expression of cruelty, sin, villainy and other ills. “Bitter defectives,” as a character in my film says. Even when they’re portrayed sympathetically, they function only to impart inspirational lessons to the able-bodied people who encounter them. CHAINED FOR LIFE is my response to the way people with disfigurements have been portrayed in films (for instance, in FREAKS, THE ELEPHANT MAN, WONDER) throughout cinema’s history. It asks whether the sum of these portrayals has adversely affected the way we are regarded in real life. I consider it a comedy, but if you think it’s a tragedy, I wouldn’t argue with you. – Aaron Schimberg

For news, screenings and updates go to: kinolorber.com/film/chained-for-life or chainedforlife.com

Chained for Life open at the Nuart Theatre in Los Angeles on September 13. Opening night with feature a Q&A with actress Jess Weixler following the 7:30 PM screening

“Critic’s Pick! An inventive hall of mirrors… that keeps finding ways to upend its characters’ — and viewers’ — perspectives. Odd, darkly funny and — when it means to be — a little frightening.” – Ben Kenigsberg, The New York Times

“Mesmerizing. A remarkable mind trip of a movie sure to leave audiences reeling.” – Kate Erbland, Indiewire

“An intoxicating whirlwind of ideas, spectacularly moving and entertaining. Chained for Life could be a defining film about representation for any group that Hollywood marginalizes.” – Andrew Todd, Birth.Movies.Death