RAISE HELL: THE LIFE & TIMES OF MOLLY IVINS tells the story of media 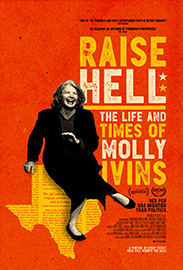 firebrand Molly Ivins, six feet of Texas trouble who took on the Good Old Boy corruption wherever she found it. Her razor sharp wit left both sides of the aisle laughing, and craving ink in her columns. She knew the Bill of Rights was in peril, and said “Polarizing people is a good way to win an election and a good way to wreck a country.”

Molly’s words have proved prescient. Now it’s up to us to raise hell! Director Janice Engel (Ted Hawkins Amazing Grace, Jackson Browne: Going Home, Addicted and What We Carry) joins us for a lively conversation on a journalist who did not shy away from confronting and shaming the most powerful institutions, political interests and the people who protected them from her righteous anger and lacerating wit.

About Molly Ivins: Molly Ivins was a nationally-syndicated political columnist and author, who remained cheerful despite the state of politics in this country and her own physical trials. She emphasized the more hilarious aspects of both state and national government, and

consequently never had to write fiction. Ivins was from Houston, Texas, graduated from Smith College in 1966, then from Columbia University’s School of Journalism with a Masters in 1967. Ivins won many awards too numerous to list for her writing, courage, and truth telling. Her freelance work appeared in The Nation, The Progressive, Mother Jones, Esquire, Harper’s, Atlantic, and Playboy. She was also known for her essays on National Public Radio as well as media appearances around the world. Ivins wrote seven books, several of which were best-sellers including; BUSHWHACKED: Life in George W. Bush’s America with Lou Dubose in 2003 and WHO LET THE DOGS IN? Incredible Political Animals I Have Known in 2004. Molly was President of the Board of the Texas Democracy Foundation publisher of the venerable Texas Observer, which was her spiritual home and love. She found her voice at the Observer and helped sustain them and lead countless other young writers in seeking out the “good” stories and bring them to the public.

“The best way to get the sons of bitches is to make people laugh at them.” – Molly Ivins

For news, screenings and updates go to: mollyivinsfilm.com

Engel gives “Raise Hell” such momentum – it’s a whoosh of a movie – that you are quickly swept up in its sights and sounds. There’s a lot to take in.” – Manohla Dargis, New York Times

“There was never anybody like Molly Ivins before, and never will be again, and this documentary does a fine job of capturing what made her special.” – Matt Zoller Seitz, RogerEbert.com

“It’s a rare documentary indeed that so expertly captures the singular essence of its subject, and [Molly] Ivins is restored to vivid and vital life, if not in the flesh than in the mind and spirit.” – Marc Savlov, Austin Chronicle