Director Irene Taylor Brodsky once again turns the camera on her deaf parents and, now, her 11-year-old deaf son Jonas, who has cochlear implants and is 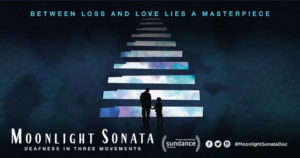 discovering a profound world of hearing—and music in this deeply personal story, Moonlight Sonata: Deafness in Three Movements.  As Jonas learns the first movement of Beethoven’s iconic sonata on the piano, his grandparents, deaf for nearly 80 years, watch with deepening awe what time and technology have bestowed their grandson. But when Jonas struggles with the sound of his mistakes, Beethoven’s own musical journey comes to life in an animated world of watercolor and haunting soundscapes.  As the great composer loses the sense that brought him so much music and fame, Jonas’s grandfather Paul loses his grasp on his mind. Their lives weave a sonata over three centuries, about all we can discover once we push beyond what has been lost. Director Irene Taylor Brodsky joins us to talks about this very personal and deeply affecting tale of three threads that run through her family and the most celebrated deaf musician of all time, Ludwig von Beethoven. Director / Producer / Editor /Cinematographer talks about the personal and professional challenges of focusing on members of her family and how the power of music has resonated brought hope and healing.

DIRECTOR’S STATEMENT: I can hear, but deafness consumes me. I am a daughter of deafness and, now, a mother too. After I discovered my son, Jonas, was going deaf as a toddler, my sound designer told me we could reproduce his gradual disconnect from hearing. 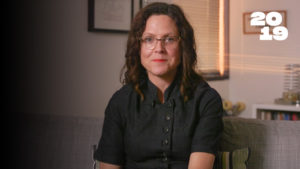 As a filmmaker, that enthralled me. As a mother, it frightened me. I’ve been down this road before. My first feature documentary, Hear and Now, about my deaf parents’ problematic journey into the world of sound, showed me how much film can be a catalyst for empathy. So when my son told me he wanted to learn the Moonlight Sonata, composed by Beethoven as he went deaf, I was cautious but resolute, and began filming. Then, my father developed dementia, and soon their three storylines revealed an eerie parallel. Paul’s loss of mind was a clue to what Beethoven might have felt losing something so precious to him. As Jonas learned to play the sonata, I read Beethoven’s letters and listened to his canon over and over again. I felt assured that my son could find his own true expression, shaped by deafness, just like Beethoven did. In Moonlight Sonata: Deafness in Three Movements we portray sound and memory through animation, and we use vast archives of home movies, vérité footage, immersive soundscape and original score to craft a rich mosaic of what it means to find vital expression in the midst of loss. —  Director Irene Taylor Brodsky

For news, screening and updates go to: moonlightsonatadoc.com

“A powerful film about parents and children, though told with enough restraint that its more affecting moments might sneak up on you.” – Matt Zoller Seitz, RogerEbert.com

“The film is refreshing in its willingness to countenance multiple viewpoints and look at what’s right for individuals rather than taking sides in one of the more heated debates within the Deaf community.” – Jennie Kermode, Eye for Film