When he was an infant, Donnie Corker suffered from the “Spider Mites of Jesus,” 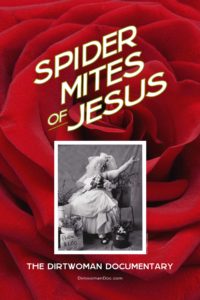 because his mother couldn’t pronounce spinal meningitis. This caused mental challenges that resulted in his lifelong illiteracy. At 13, he began selling his body on the streets as a drag prostitute. When he was arrested, he took a dump in the back of the police car, leading the cops to give him the moniker: Dirtwoman. Since then he’s run for mayor, gotten kicked out of the inauguration of America’s first black governor (Douglas Wilder), posed for his own pin-up calendar (weighing in at 350 pounds), offered crabs from his crotch for a GWAR video and hosted the annual Hamaganza fundraiser that provided “Hams for the Hamless.” When he died last year at 65, it was on the front page, top-of-the-fold of the Richmond Times-Dispatch and was featured nationally on NPR. Director Jerry Williams talks about living in the same town as Donnie Corker (Dirtwoman) and the lasting impact he had on so many people and different communities within the city of Richmond.

About The Dirtwoman Documentary: While taking a lunch break on a shoot in 1999, Jerry  and local videographer Dave Park started discussing Dirtwoman. They partnered with local producer Liz Throckmorton to create a documentary. It was launched with big birthday

party for Dirtwoman. Then they got sidetracked for 17 years making a living. In February 2017, Jerry was contacted by Mark Holmberg, a long-time friend who chronicled the exploits of Dirtwoman (in print at the Richmond Times-Dispatch, then as reporter for CBS6). Donnie had been diagnosed with congestive heart failure and Mark aired a story that included Jerry. That sparked his motivation to return to the project. Jerry’s produced hundreds of videos during his career, but never had a passion project. He enlisted colleagues from all aspects of the production biz to help him, most working for free…because they liked the idea. (See “Who Worked on It”) He produced the teaser in May 2017 to promote the project and recruit more interviews. When editing started in March 2018, 70 people had been interviewed (see “Who’s In It”). In addition to the video footage shot in 1999, the doc will feature never seen before video and photos.

For news, screenings and updates go to: dirtwomandoc.com