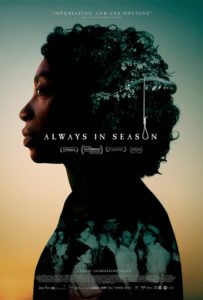 hanging from a swing set in Bladenboro, North Carolina, the authorities quickly ruled his death a suicide. In light of suspicious details surrounding his death, and certain that her son would not take his own life, Claudia is convinced Lennon was lynched. Jacqueline Olive’s unwavering debut film ALWAYS IN SEASON puts Lacy’s pursuit for justice into a wider historical context, inspiring a powerful discussion about lynching across racial lines. Appalling accounts of lynchings carried out at the beginning of the twentieth century provide a necessary historical framework, while an annual lynching reenactment in Monroe, Georgia, offers insight into the enduring legacy of racial violence in America. Olive’s layered exploration follows one African American family’s personal experience with a justice system that has failed so many, while also hinting at the promising first steps of a nation trying to reconcile. Olive’s film honors and acknowledges the injustices that have been inflicted, while emphasizing that only through the uncomfortable conversations and acceptance of our nation’s history will we begin to heal together. Director / Producer Jacqueline Olive joins us for a conversation on the bitter, pernicious and deadly legacy of the Confederacy and the enslavement of human beings in service to big business interests.

About the filmmaker: Director / Producer Jacqueline Olive is an independent filmmaker and immersive media producer with fifteen years of experience in journalism and

\film. Her debut feature documentary, Always in Season, premiered in competition at the 2019 Sundance Film Festival and was awarded the Special Jury Prize for Moral Urgency. Jackie also co-directed the award-winning hour-long film, Black to Our Roots, which broadcast on PBS in 2009. Jackie has received artist grants and industry funding from Sundance Institute, Independent Television Service, Ford Foundation, Firelight Media, and more. She was recently awarded the Emerging Filmmakers of Color Award from IDA and the Jonathan Logan Family Foundation.

For news, screenings and updates go to: alwaysinseasonfilm.com

Always in Season opens in LA on Friday, September 27 at the Laemmle Music Hall – A Q&A with Director Jacquelin Olive will follow the 7:30 PM screening

“‘Always in Season’ makes a powerful case that the history of lynching in the American South is not just history – that murders still haunt the present-day sites where they occurred, and that such killings can and do happen today.” – Ben Kenigsberg, New York Times

“A nuanced, layered reminder of how far we still have to go to correct the injustices of this country’s past and present.” – Brian Tallerico, RogerEbert.com

“Although difficult to watch, the film is invaluable in its exploration of lynching as a form of racial terrorism.” – Andrea Gronvall, Chicago Reader