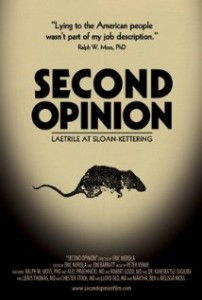 The War On Cancer, launched in the early 1970s, set the stage for a massive influx of new ideas in fighting the disease of cancer. Memorial Sloan-Kettering Cancer Center, America’s leading cancer research center at the time, was assigned the task of testing an unconventional therapy called “Laetrile” in an effort to curb the public’s “false hope” in the alleged “quack” therapy. Ralph W. Moss PhD, a young and eager science writer, was hired by Sloan-Kettering’s public relations department in 1974 to help brief the American public on the center’s contribution to the War On Cancer. One of his first assignments was to write a biography about Dr. Kanematsu Sugiura, one of the Center’s oldest and leading research scientists as well as the original co-inventor of chemotherapy. While meeting with this iconic scientist to pen a biography on his 60-year career at Sloan-Kettering, Moss discovered that Sugiura had been studying  this “quack remedy” in laboratory mice, and with unexpectedly positive results. Director Eric Merola stops by Film School to talk about what happens when money, power and idealism converge.

For news and updates on Second Opinion go to: secondopinionfilm.com/

“Though a documentary, it’s dramatic enough to be reminiscent of ‘The Insider’, the whistleblowing thriller about Big Tobacco.” – Graham Fuller, New York Daily News – August 28, 2014

“See this film for a riveting account of the conflicts between corporate power and the public good.” – Counter Punch – August 29, 2014