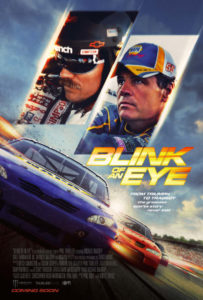 relationship between Michael Waltrip, a perennial underdog, and Dale Earnhardt, the most feared & iconic driver in NASCAR history. On the fateful running of the Daytona 500 at the inception of the 2001 season, Michael Waltrip broke his 462-race losing streak in epic, but heart-breaking fashion, in what is considered the Super Bowl of motorsports. Triumph becomes tragedy, as Michael’s best friend and team owner, Dale Earnhardt, crashes in the final lap – creating a shocking debt that is paid back in spectacular and dramatic fashion on Waltrip’s emotionally- charged return to Daytona, and a race to the finish with Dale’s son, Dale Earnhardt Jr. Director /Producer / Writer Paul Taublieb stops by to talk about a story that runs the gamut of unrivaled success, enduring friendship, frustration, perseverance, exhilarating triumph and unbelievable tragedy.

Filmmaker Statement – Great stories are a gift, and this one has all the elements – the

dramatic intersection of triumph, tragedy, the unexpected, and amazing characters. It’s a story that transcends sports, much like Free Solo (2018) or The Endless Summer (1966), bringing a human quality that anyone can relate and be engaged to, whether you are a sports fan or not. My film resonates with themes of perseverance, grit, determination and above all, the redemptive transformation of friendship, even in tragedy. – Director Paul Taublieb

For news and updates go to: blinkofaneyefilm.com

“Even moviegoers with no vested interest in motorsports are apt to be moved by this bittersweet Cinderella-ish saga.” –  Nick Schager, Variety

“Part biography, part love-letter, the documentary is a testament of human perseverance and the power of individuals to shape the lives of those around them.” – Ian Thomas Malone, Ian Thomas Malone

“The pic will naturally hold its biggest appeal for racing buffs but may also prove appealing to nonfans thanks to the moving story at its core.” – Frank Scheck, Hollywood Reporter