Running in the Democratic primary for the U.S. Senate seat held by Mitch 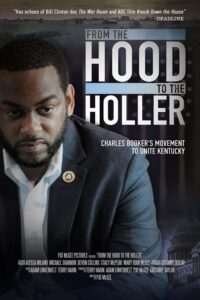 McConnell, Charles Booker attempts one of the biggest upsets in political history by challenging establishment-backed candidate Amy McGrath. FROM THE HOOD TO THE HOLLER follows Booker’s campaign across Kentucky, from the most urban to the most rural settings, with Booker and his team

rewriting the campaign playbook. Instead of exploiting divisions, they lean into the idea that average Kentuckians have common bonds, united by their shared day-to-day fight to survive. His message is simple: Whether you are from the city “hood” — like Booker — or the Appalachian “holler,” you are not invisible. Igniting a movement

known as FROM THE HOOD TO THE HOLLER, political activist Charles Booker works to unite people of all socio-economic backgrounds while fighting against big money in politics, voter suppression, and systemic corruption. Filmmakers, director Pat McGee and producers Adam Linkenhelt, Terry Hahin, Gregory Taylor capture a young man finding his voice as a leader and his incredible journey against the odds.

For updates and screenings go to: fromthehoodtothehollerfilm.com

For more about the filmmaker: patmcgeepictures.com

FROM THE HOOD TO THE HOLLER will be released the film in Los Angeles at the Laemmle Monica Film Center, and in New York City at the Cinema Village and additional select markets on September 16. Pat McGee Pictures will release the film on digital platforms beginning September 30.

About the filmmaker – Pat McGee is a documentary director in both film and television who works to unearth character-driven stories that push to find a common ground. Most recently, McGee directed and produced the award-winning “From the Hood to the Holler,” a feature on political activist Charles Booker of Kentucky, one of the rising stars of the progressive political movement. In 2022, Pat also executive produced and directed the soon-to-be-released project about Warren Jeffs the leader of the Former Latter Day Saints for Warner Bros. The three-part documentary series is told through the lens of Warren Jeffs’ 65th wife as she survives and escapes Jeffs and the FLDS. Pat’s debut feature documentary  American Relapse, won feature documentary honors at film festivals across the country. American Relapse enjoyed a theatrical release in Los Angeles and New York. In 2018, Vice TV launched the original  Pat McGee Pictures series Dopesick Nation, a 10-part documentary about the opioid epidemic in Florida. In 2017,  Pat created and produced 24 to Life for A&E Networks. 24 to Life was the highest-rated unscripted show on Lifetime Movie Network for 2016 and subsequently was awarded a second season. Other documentary feature credits include The Deported featuring Rosario Dawson, CAL FIRE, allowing Pat and his team to embed with one of the country’s largest and most active firefighting agencies and Bernie Blackout, chronicling the behind-the-scenes marriage of politics and media during the Bernie Sanders 2020 presidential campaign for Vice TV. Pat McGee is a member of the Directors Guild of America and has operated under his production company Pat McGee Pictures since 2015.

“It Booker goes on to unseat the hilariously hated, Russia loving Rand Paul for a Senate seat this fall, “From the Hood to the Holler” will make a fascinating footnote for a sea change in American politics and…when Kentucky finally woke up.” – Roger Moore, Movie Nation