The  harrowing story of the GOOD MADAM, begins with the death of her 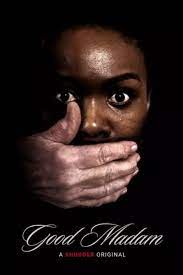 grandmother, the woman who raised her, Tsidi (Chumisa Cosa) and her daughter are forced to move in with Tsidi’s estranged mother, Mavis (Nosipho Mtebe), who has lived and worked in the wealthy suburbs of Cape Town for most of Tsidi’s life. Residues of apartheid-era domestic servitude confront legacies of colonial land theft in South African auteur Jenna Cato Bass’s daring horror-satire. Jenna Cato Bass (High Fantasy, Flatland) transforms the legacies

of South Africa’s colonial land theft and Black domestic service to white bosses into a gutsy psychological thriller. Co-written with Babalwa  Baartman, Mlungu Wam (Good Madam)  grapples with the daily violence that haunts the nation’s most pressing political issues, long after the end

of apartheid. Summoning horror-satire references from Ousmane Sembène’s  Black Girl to Jordan Peele’s Get Out, Bass and Baartman’s suspenseful descent into complex, searing allegory insists on reckoning with the enduring presence of traumas deceptively labelled “history.” Director Jenny Cato Bass and co-screenwriter Babalwa Baartman join us for a conversation on the inspiration for GOOD MADAM, impact and legacy on today’s South Africa, their on-going collaboration, and the superb cast of actors who helped them realize their vision.

For more on Good Madam go to: shudder.com

About the filmmaker – Jenna Cato Bass is a director, writer, and photographer living in Cape Town, South Africa. She is a graduate of AFDA film school, Cape Town and has worked as a director, writer, cinematographer, photographer and magician. She has directed over ten short films, and seven music videos. Her video, Hold the Sorrow, was accepted into the 2008 ViMus International Music Video Festival. Her short film, The Tunnel, was selected for the Focus Features Africa First Program. Jenna’s award-winning work has run the spectrum of sci-fi (So Long to the City), experimental  (Jellyfish), teenage coming of age (Already Gone) and historical magical realism  (The Tunnel). Some of her other films include Love the One You Love (2014), winner of Best Feature Film at Jozi Film Festival 2015, and High Fantasy  (2017), winner of the Artistic Bravery Prize at Durban International Film Festival 2018.

About the filmmaker – Babalwa Baartman is a social entrepreneur and aspiring creative producer who uses storytelling as a medium of healing to affect social change within the African community at large. Through her production company, Sanusi, and with Jenna Cato Bass, Baartman co-wrote and co-produced the short film Sizohlala (19), a story that highlights the occupation movements in South Africa, and the TIFF 2021 selection Mlungu Wam (Good Madam), a psychological horror that addresses inequality in South Africa through the story and experience of a domestic worker and her daughter. In animation, Baartman currently has a feature in development,  Azania, and runs a 2D animation programme with False Bay College graduates.

“Mlungu Wam is a masterclass in how horror can speak to race and inequality, set in a world of servitude presented as a terrifying, powerful and unrelentingly enduring mode of postcolonial possession” – Alexandra Heller-Nicholas, AWFJ Women on Film

“The film expertly blends satirical social commentary and disturbing horror tropes to shine a light on the appalling racial and economic divides that still shape the country 30 years after the end of apartheid.” – Nikki Baughan, Screen International