GRANDPA WAS AN EMPEROR follows Yeshi Kassa, great-granddaughter of 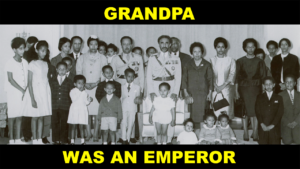 Emperor Haile Selassie of Ethiopia, as she embarks on a personal quest to discover what happened to her closest relatives during the coup of 1974. While Yeshi and her older sister were thousands of miles away in a British boardin school, her great-grandfather was deposed by a revolution, setting off a harrowing chain of events that would put her parents and siblings in grave danger.  For the very first time, the royal family examines the events that led to the collapse of a

3,000-year-old dynasty and reflects on how, against all odds, they were able to

survive this turbulent time in Ethiopian history. Director Constance Marks (Being Elmo: A Puppeteer’s Journey, Green Chimneys) joins us for a conversation on the remarkably important role that Emperor Haile Selassie played during World War II and in the post-war period of African nation’s drive to break free of colonial control and the lasting his legacy has had on the lives of his children and grandchildren as seen through the eyes of his great-granddaughter Yeshi.

For updates go to: constancemarks.com/grandpa-was-an-emperor

About the filmmaker – Constance Marks (Producer, Director) is an award-winning independent documentary filmmaker. She is the founder and president of Constance Marks Productions, Inc., a documentary production company based in New York City. Marks began her filmmaking career over 35 years ago as an assistant editor for the renowned Cinema Verite pioneers, David and Albert Maysles. Marks’ critically acclaimed films have been shown theatrically, broadcast widely, and garnered numerous awards. Her productions include: BEING ELMO: A PUPPETEER’S JOURNEY which won the Special Jury Prize at the Sundance Film Festival and has been exhibited worldwide to critical acclaim, and GREEN CHIMNEYS — a full-length documentary feature film which premiered at the Sundance Film Festival and aired on HBO. Marks has produced numerous films focusing on important social issues including homelessness, the elderly, experimental charter schools, teen pregnancy and substance abuse recovery residences. For more go to: constancemarks.com

“Grandpa Was an Emperor is undeniably compelling as it explores a birthright backfiring.” – Stephen Saito, Moveable Fest

“Grandpa Was An Emperor is a wonderful documentary…” – Grady Bolding, Cultured Vultures