HALLELUJAH: LEONARD COHEN: A JOURNEY, A SONG is a definitive 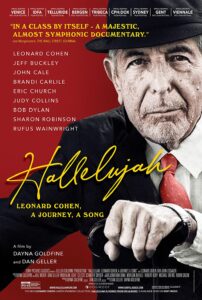 exploration of poet / singer / songwriter Leonard Cohen (1934 – 2016) as seen through the prism of his internationally renowned hymn, “Hallelujah.” This feature-length documentary weaves together three creative strands: The songwriter and his times; the song’s dramatic journey from record label reject to chart-topping hit; and moving testimonies from

major recording artists for whom “Hallelujah” has become a personal touchstone. The song enjoyed a new life in 1991 after being covered by John Cale (Cohen shared over 100 unused verses with him), then Jeff Buckley on his Grace album — and evolved through countless versions to become one of the most beloved songs of all time. Approved for

production by Leonard Cohen just before his 80th birthday in 2014, HALLELUJAH: LEONARD COHEN: A JOURNEY, A SONG accesses a wealth of never-before-seen archival materials from the

Cohen Trust including Cohen’s personal notebooks, journals and photographs, performance footage, and extremely rare audio recordings and interviews. Drawing from this wealth of archival materials, directors Daniel Geller and Dayna Goldfine (BALLETS RUSSES) meticulously trace the career of the restless Canadian as they detail the unlikely path of his famous composition.

For updates and screenings go to: sonyclassics.com/hallelujah

About the filmmakers – For over twenty-five years, Emmy-award winning directors/producers Dan Geller and Dayna Goldfine have jointly created critically-acclaimed multi-character documentary narratives that braid their characters’ individual personal stories to form a larger portrait of the human experience. Their most recent film, THE GALAPAGOS AFFAIR: SATAN CAME TO EDEN (2013) had its world premiere at the Telluride Film Festival and its European premiere in Berlin. It opened theatrically to strong critical reviews nationwide in April 2014, has played theaters and festivals internationally, and appeared on a dozen critical “Best Films of 2014” lists including those of the San Francisco Chronicle, the Seattle Times, Seattle Post-Intelligencer and Filmmaker Magazine. THE GALAPAGOS AFFAIR is now available worldwide on VOD as well as consumer and educational DVD. eller and Goldfine’s work also includes: the award-winning SOMETHING VENTURED (2011), which premiered at SXSW and went on to play festivals and screen internationally, as well as in educational distribution, VOD and consumer DVD release worldwide, and national PBS broadcast in January 2013; BALLETS RUSSES (2005), which was recognized as one of the top five documentaries of 2005 by both the National Society of Film Critics and the National Board of Review and appeared on a dozen critical “10 Best Films” lists, including those of Time magazine, the Los Angeles Times, the Hollywood Reporter, the San Francisco Chronicle and Slate; NOW AND THEN: FROM FROSH TO SENIORS, which premiered theatrically in October 1999 and aired on PBS in October 2000 as the lead program of the Independent Lens series; KIDS OF SURVIVAL: THE ART AND LIFE OF TIM ROLLINS + K.O.S. (1996), a feature-length documentary about the South Bronx-based art group Tim Rollins & K.O.S., which aired on Cinemax in September 1998 and was the recipient of two national Emmy awards; FROSH: NINE MONTHS IN A FRESHMAN DORM (1994); and the award-winning ISADORA DUNCAN: MOVEMENT FROM THE SOUL (1998). Dan Geller and Dayna Goldfine were admitted to the Documentary Branch of The Academy of Motion Picture Arts and Sciences in June 2014. For more: gellergoldfine.com

“’Hallelujah’ is a lot of song… it’s epic and lovely and trancelike: a hymn cast in a pop idiom. The song took a journey – changing, becoming, acquiring layers of soul and enchantment. A music doc this rich (is) about how a quiet artist, without  planning to, created a song heard round the world.” – Owen Gleiberman, Variety

“A rousing portrait of the power of expression, something that Leonard Cohen perfected more than most songwriters that ever lived.” – Brian Tallerico,  RogerEbert.com

“This majestic, almost symphonic documentary… an account of how ‘Hallelujah’ has become a receptacle into which new generations of singers pour their musical souls. Like the song, whose title contains an affirmation…the film affirms the value and power of making art.” – Joe Morgenstern, The Wall Street Journal