Hamtramck, Michigan is a city built by immigrants. The city thrived thanks to 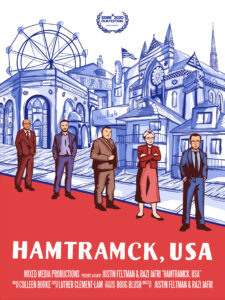 Polish Catholic immigrants drawn to the industrial boom of America. In the late 1990’s, Bangladeshi and Yemeni Muslim immigrants revitalized this post-industrial city. This multi- ethnic city prides itself on its mantra “The World in 2 Square Miles,” boasts about the over 30 languages spoken in the schools and the

diversity that comes with it. However, when it comes to the city’s politics, the city quickly splits into factions, pitting communities against each other. From these tensions, candidates emerge, hoping to be the voice for their community in City Hall. Karen Majewski, Hamtramck’s first female mayor in the city’s 100 year lineage of Polish mayors, is seeking her fourth term as mayor. She promises to run until she “sees someone capable” of running the city. Through the election

cycle, candidate’s face challenges and opportunities within each

community, including their own. Through the exploration of the city’s rich history and this heated election, Hamtramck, USA wrestles with identity politics, power dynamics, and the immigrant experience in America. Co-directors Justin Feltman and Razi Jafri join us for a conversation on the changing political, racial and cultural landscape of America and why we should not be afraid of America’s future, but embrace it.

For news and updates go to: hamtramckdocumentary.com

Hamtramck, USA can be seen on air and streaming as part of the series America ReFramed nationwide on WORLD Channel and on worldchannel.org starting on May 25

About the filmmaker – Razi Jafri is a Detroit based documentary photographer and filmmaker whose work focuses on religion, race, politics, immigration, and the changing cultural landscape in America. His own experience as a Muslim immigrant has informed much of his work. His current projects include Hamtramck, USA, a film about democracy in America’s first Muslim majority town, located in Michigan, which will premier at SXSW in 2020. His other project, named, Loyalty, follows three Muslim chaplains as they navigate religious freedom and islamophobia in the US armed forces. Loyalty is currently nearing the end of production. Razi served as a mentor in Kartemquin Films Diverse Voices in Docs (DVID) Fellowship. He has been awarded fellowships by Facing Change: Documenting Detroit, the New York Foundation for the Arts (NYFA), The Salzburg Global Forum, and most recently, the Knight Foundation Fellowship at the Sundance Film Festival. Razi became a documentary photographer and filmmaker after a ten-year engineering career in the automotive and biomedical industries in order to pursue more meaningful work. Razi is an alumnus of the University of Michigan-Dearborn where he received a bachelor’s degree in engineering.

About the filmmaker – Justin Feltman graduated from Pacific Union College, where he studied Film and Business Administration with a Marketing emphasis, building an understanding of the art and business of filmmaking. His Senior year, he produced the short film, Heaven, which took home the award for the school’s Best Senior Thesis. Justin worked on several independent films, such as I Am I and Struck by Lightning, as well as several documentaries, Napa Valley Dreams and CHECK IT. He produced several short films, music videos, and a web series. He currently creates video content for nonprofits and small businesses throughout the DC area.

“Hamtramck, USA gives us one of the more down-to-earth yet somehow inspiring political documentaries of the past few years.” – Audrey Fox, JumpCut Online

“[The filmmakers] realize that just being truthful and present can offer cinematic insight.” – Brian Tallerico,

“In these cynical times, it’s enough to make you believe there are still places in America where democracy exists.” – Clint Worthington, The Spool

“You may not start packing your bags to move to the Midwest upon watching Hamtramck, USA, but it will surely make you reconsider your preconceived notions and potential prejudices.” – Alex Saveliev, Film Threat