In HELLBENDER, 16-year-old Izzy (Zelda Adams) suffers from a rare illness that 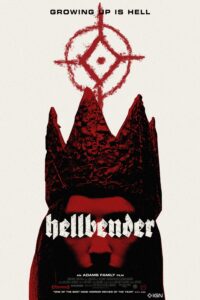 has kept her isolated on a mountaintop with her mother (Toby Poser) her whole life. As Izzy begins to question her sickness, she pushes back against her confinement and secretly befriends Amber (Lulu Adams), another girl living on the mountain, but  her newfound happiness is derailed after she eats a live worm as part of a juvenile game and finds an insatiable and violent hunger awakened within her. To understand the hunger, Izzy must learn the dark secrets of her family’s past and the ancient power in her bloodline. HELLBENDER is the latest from upstate N.Y. filmmaker family The Adams, Hellbender is written, directed, produced, scored, and edited by Toby Poser, John Adams, and Zelda Adams —

who also star, alongside Lulu Adams. It’s the sixth feature from Wonder Wheel Productions, the family-run production company founded by Poser and Adams and their children, and the family also

produced the music for the feature with tracks from their experimental punk band H6LLB6ND6R. Co-directors Toby Poser, John Adams, and Zelda Adams (The Deeper You Dig, Knuckle Jack) join us for a spirited conversation on sharing the on-set responsibilities of being in front of and behind the camera, making movies in the own backyard, and the importance of creating three dimensional characters that resonate with their audience beyond shock and fear.

For updates and screenings go to: yellowveilpictures.com/hellbender

About the filmmaker – When not making films, John Adams is an accomplished artist (see getdownmakeart.com) and musician. Aside from composing music for film, John is also known for writing and performing with bands Banana Fish Zero, Statues of Liberty, and Kid Kalifornia. Hailing from New York state, John enjoyed an illustrious modeling career in the ’90s, representing the likes of Armani and Calvin Klein and traveling all over the globe. In 2008 the Fuse Channel cast John as Rock and Roll Acid Test’s stuntman / maniac-with-a-hammer. He’s also a house and barn builder and a soccer and track coach.

About the filmmaker – After graduating from Tulane University with a BFA in Acting, Toby Poser moved to New York and began acting in stage productions Off-Broadway (like Mike Leigh’s ECSTASY with the New Group) and regionally. For three years she filled the role of GUIDING LIGHT‘s wicked “Malibu Madam” Amanda Spaulding, all the while acting in other TV classics like all of the various LAW & ORDERs and in independent films like Sundance darlings  THE INCREDIBLY TRUE ADVENTURE OF 2 GIRLS IN LOVE and STEAL ME. As a voice over artist, she’s been heard on numerous national campaigns, including the Progressive Auto Insurance commercials with Flo.

About the Filmmaker – Zelda Adams was born in New York City and moved to Topanga Canyon, CA when she was 5. While Z has won acting awards on the indie film festival circuit, she has also been operating the camera since she was 9 and is now writing, directing, shooting, and editing her own short films and music videos. Her first short, NOBLE, premiered at the Walla Walla Movie Crush and played at NY Young Film Makers. Zelda plays soccer and travels year-round with Nirvana360 FC. She also plays drums and sings with bands Kid Kalifornia and Hellbender.

“Although made on a tiny budget, this highly original exercise in folk horror punches well above its weight with snappy dialogue, trippy visual effects and impressive camerawork.” – Leslie Felperin, Guardian

“If there’s a lesson to be taken from Hellbender, it’s this: Underestimate the small and unassuming at your own peril—whether that be the character of Izzy, the film’s real-life creators, or the movie itself.” – Katie Rife, AV Club

“One of the best Horror movies of the year.” – Syfy Wire

“Some keen editing by John Adams and special effects by Trey Lindsay elevate this into formidable genre fare, with psychedelic sequences that are remarkably polished.” – Lena Wilson, New York Times