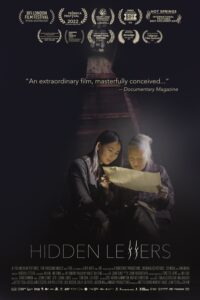 history of being forced into oppressive marriages as well as forbidden to read or  write by their households for thousands of years. To cope, they developed and shared a secret language among themselves called Nushu. Written in poems or songs with bamboo pens on paper-folded fans and handkerchiefs, these hidden letters bonded generations of Chinese women in a clandestine support system of sisterhood, hope and survival. Spanning between past and present, from sunken rice

fields and rural villages to bustling metropolitan cities, HIDDEN LETTERS follows two millennial Chinese women who are connected by their fascination with Nushu and their desire to protect its legacy. In Jiangyong, Hu Xin works as a Nushu museum guide and aspires to master the ancient script following the breakup of her marriage. In Shanghai, Simu is passionate about music and Nushu, but marital expectations

threaten to end her pursuit of both. Influenced by Nushu’s legacy of female solidarity, the two women struggle to find balance as they forge their own paths in a patriarchal culture steeped in female subservience to men. Director Violet DuFeng (Please Remember Me, Dear Mother) joins us for an enlightening conversation on the history of Nushu, the pressure that was and continues to be brought down on the women who have carried the torch of this specialized language and the unbreakable bonds its usage has forged, generation upon generation.

To watch go to: hiddenlettersfilm.com

For more go to: cargofilm-releasing.com/hidden-letters

About the filmmaker – Director / Producer Violet Du Feng is a documentary filmmaker and a 2018 Sundance Creative Producing Fellow. She produced DEAR MOTHER, I MEANT TO WRITE ABOUT DEATH, SINGING IN THE WILDERNESS, CONFUCIAN DREAM, MAINELAND, and PLEASE REMEMBER ME, which have won many awards including Doc Impact Hi5, Special Jury Awards at SXSW and Karlovy Vary International Film Festival. Feng started her career as a co-producer on the 2007 award-winning NANKING. She is the consulting programmer of Shanghai International Film Festival. HIDDEN LETTERS is her second feature-length documentary as a director.

About the filmmaker – Zhao Qing is the director of the award-winning PLEASE REMEMBER ME, supported by the Sundance Documentary Fund, IDFA Bertha Fund and the Britdoc Connect Fund. She started her career at Shanghai Media Group in 1991, where she directed and produced many television documentaries affiliated to the Documentary Channel of SMG. She directed and hosted several popular TV documentary programs such as “The Bund” and “Documentary Editing Room.”

“Whatever you might be expecting from Hidden Letters, it is unquestionably so much more. It takes the concept of embracing culture and heritage then translates that into a compelling discussion of the patriarchy, gender inequality and the difficulty in preserving tradition in a commercial world.” – Film Savage

“Hidden Letters walks us through a sorrowful past, the clashes of the present, and contemplates widely on the possibilities that await us in the future.” – Matthew Roe, Film Threat

“It’s a riveting, moving film, assembled with a remarkable fluidity to make its important points almost subliminally. And the observations are unusually complex and nuanced.” – Rich Cline, Shadows on the Wall

“One of 2022’s most beautiful and transformative documentaries.” – Richard Propes, TheIndependentCritic.com

“In their very moving documentary, directors Violet Du Feng and Qing Zhao show how generations of Chinese women found cracks in their oppressive, patriarchal society and created a way to find a small ray of sunshine in an otherwise bleak existence.” – Marilyn Ferdinand, AWFJ Women on Film