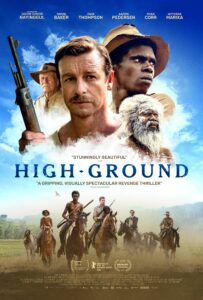 indigenous man, Gutjuk, teams up with a World War I soldier / ex-sniper, Travis, to track down the dangerous Bayawara, a fierce warrior in the Territory, who is also his uncle. As Travis and Gutjuk journey through the outback they begin to earn each other’s trust, but when the truths of Travis’ past actions are suddenly revealed, it is he who becomes the hunted. High Ground was conceived as a story that would challenge accepted notions of the colonial settlement of Australia. High Ground 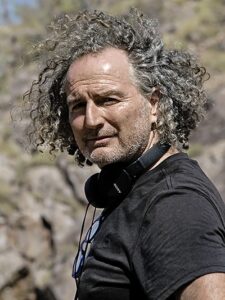 For news and updates go to samuelgoldwynfilms.com/high-ground

Director’s Statement – At the heart of High Ground is the tragic story of Frontier encounters and the missed opportunity between two cultures, black and white. High Ground was conceived as a story that would challenge accepted notions of the settlement of Australia. Faced with the myth of terra nullius the aim with the film is to create a new mythology and present a different perspective on how this country was made. It explores the themes of identity and culture and the attempts that were made to preserve and progress culture in the face of an overwhelming threat. High Ground is a story with mythic proportions with complexity and no easy answers. This story presents a view that there really is no such thing as settlement it’s all about conquest, it explores the way in which society is built and how connections are made between people and it exposes the shameful truth of our frontier history but rather than choosing to dramatize a specific historical event ‘High Ground’ draws on contact history from a variety of locations – a fiction to illustrate a deeper truth. High Ground is a powerful human drama, instilled with a strong sense of hope and fear, a story of treachery, heroism, sacrifice, freedom and love, misguided beliefs, an unequal struggle for power, and grief. But above all it is a story about the finding of one’s roots. My aim has been to entertain and immerse an audience in an environment teeming with unexpected threats, and to take them on a ride through an aspect of our history that is under-represented and hopefully encourage them to rethink the Australian story.

About the filmmaker – Stephen Maxwell Johnson grew up in the Bahamas, Africa and the Northern Territory of Australia. He began his film and television career at Channel 9 as a trainee cameraman and has worked on mainstream drama, news and current affairs shows. He attended acting school in London and then headed back to the Northern Territory intent on making his first movie. Stephen established a production house and narrow cast television station in Darwin and directed, produced and photographed drama, documentaries, television commercials, animation, corporate films and rock clips all over the Northern Territory, Australia and many remote Indigenous communities. Stephens work include his multi award winning rock clips for the band Yothu Yindi including ‘Treaty’ an AFI award for best Children’s drama ‘Out There’, an AFI nomination for best direction in television and his first movie which he directed, executive produced and script edited ‘Yolngu Boy’. Stephen has recently completed his second feature film ‘High Ground’ which has been 20 years in the making. High Ground premiered at the at the Berlin International Film Festival in 2020 and will be released in cinemas 2021.

“Australian storytelling that packs a punch and pushes you to think deeply about the history of this country, High Ground captures the raw beauty of Arnhem Land as it does the brutality of colonialism.” Wenlei Ma, News.com.au

“More intimate than epic, but gorgeous, stately and tense, it captures a last burst of tit-for-tat reprisals in a country starting to face its genocidal past and racist present.” – Roger Moore, Movie Nation

“…High Ground is an overwhelming achievement of cinematic brilliance. It continues the legacy of Sweet Country by exposing the horrifying actions of White Australians…” – Andrew F. Peirce, The Curb

“High Ground is a deceptively simple story about the lingering consequences of revenge through racism taken to heights of excellence due to beautiful vistas, top representation of Aboriginal culture and its brutal depiction of violence.” – Harris Dang, The AU Review

“In the magnetic Nayinggul, superb as the boy on the brink of manhood who must choose whether to reject anger or embrace it, the film showcases a notable new talent.” – Wendy Ide, Screen International